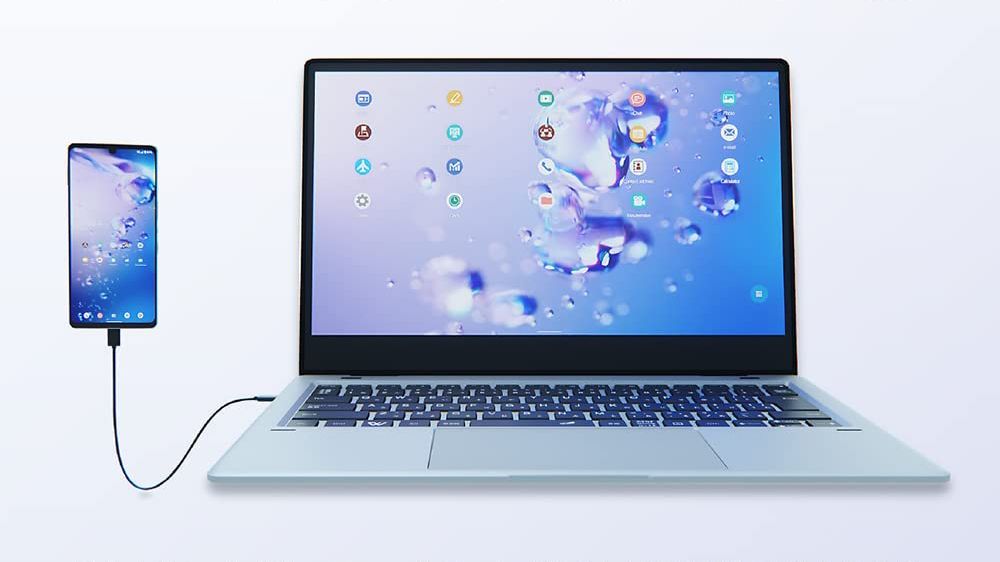 PC Watch has uncovered a new makeshift laptop design that turns any smartphone into a working laptop. The HTL WitH features a 13.3-inch display and a 5000mAh battery. It is compatible with Android and iPhone smartphones featuring display output through their respectable charging ports.

The WitH features a 13.3-inch IPS LCD that supports a 1080P resolution; the clamshell measures 311x210x14.9mm and weighs 2.6lb. The device carries a very respectable 5000mAh battery that we believe powers both the device and charges the smartphone simultaneously. Either way, the laptop reportedly has a 6-hour operation time.

Port selection includes two dedicated USB ports for phone input – one for Android and the other for iPhone, two HDMI ports, with each one offering input or output capabilities, a 3.6mm headphone jack, and a card reader. Finally, there’s one USB port for charging the laptop and another that appears to be a standard port that doesn’t do anything special.

Sadly, this laptop device is not available in the United States and only appears to be available from Amazon’s Japanese web page, priced at 61,380 Yen or $449.

This isn’t the first time we’ve seen a device like this; though it never came to market, Razer’s Project Linda (opens in new tab) in 2018 was an early example of a smartphone-powered laptop, but with a focus on gaming. This concept device was unique because it docked Razer’s smartphone directly where the touchpad would be located, allowing it to be used as a touchpad while installed.

The laptop also had many other cool features, including some unique gaming features that allowed keyboard and mouse inputs to work with the phone, and it featured 200GB of internal storage for the phone to utilize when plugged in. It’s just a shame it never came out of its concept phase.

Another device out on the market is the Nexdock laptop powered by Samsung smartphones through Samsung’s Dex software. You can buy this device right now, and it works with all Dex-supported phones starting with the S8.

But, the nice thing about the WitH is its wide range of support, including Android and iPhone devices. This is something the two previous examples lack, being locked into either Razer or Samsung’s ecosystem.