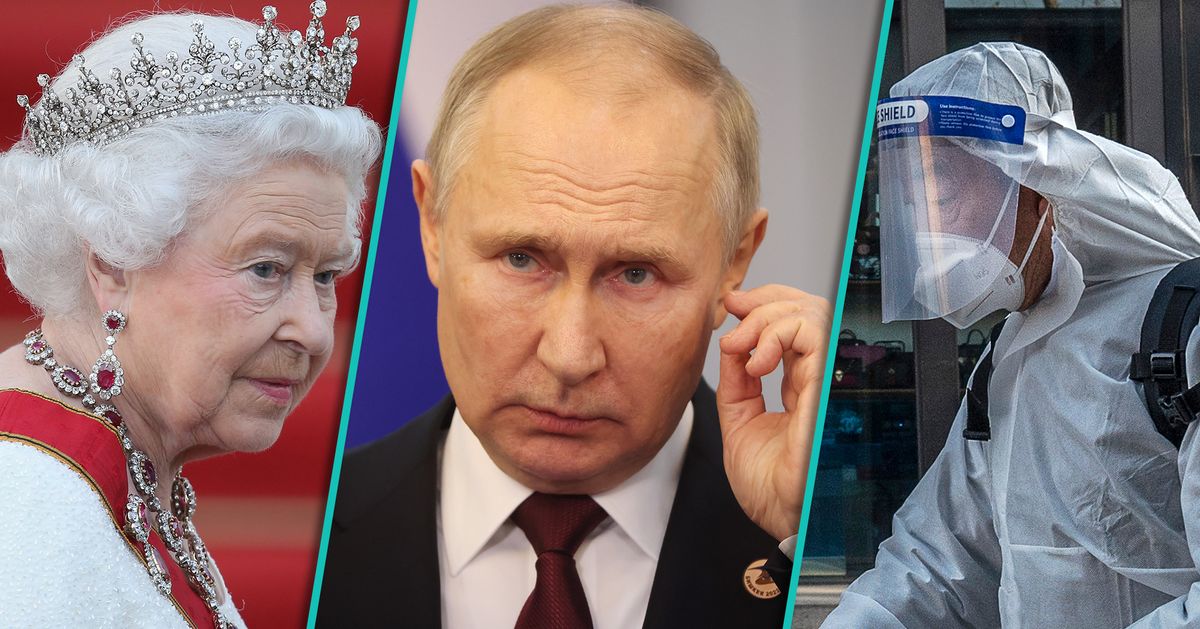 2022 was undoubtedly a year of major international news, though dominated by Russia’s brutal war in Ukraine.

While the COVID-19 pandemic continues to be a significant world story, the availability of vaccines and therapeutics has helped ease its toll in many countries. Even China started easing some restrictions for the first time since the pandemic began.

Meanwhile, protests, climate disasters and big political events made headlines. Here’s a recap of the biggest stories that happened outside the U.S. this year.

Russian President Vladimir Putin invaded Ukraine on Feb. 24. Putin originally expected the war would be easily won by Russia, underestimating the force with which the Ukrainian people would fight back to protect their country as well as the degree of support they would receive from allies around the world.

The international community displayed solidarity by applying strong sanctions against Moscow and providing crucial military and financial help to Kyiv.

The U.S. alone has contributed significantly to Ukraine’s efforts. A new spending bill by the U.S. Congress includes an additional $44 billion in emergency funding for the country. If the package passes, the total amount of support the U.S. will have provided to Ukraine since the war began will top $100 billion, according to The New York Times.

Zelenskyy visited Washington, D.C., on Wednesday — his first international trip since the war began. He addressed lawmakers in a rare joint session of Congress, expressing gratitude to the U.S. for its continued support and noting how crucial it’s been in the fight against Russia.

“Your money is not charity. It’s an investment in global security and diplomacy that we handle in the most responsible way,” Zelenskyy said.

The Ukrainian leader also participated in a press conference alongside President Joe Biden at the White House, where Biden pledged to support Ukraine for “as long as it takes.”

While Ukraine has made significant gains in the conflict, by recapturing areas previously occupied by Russia in a successful counteroffensive this fall, Putin appears determined to keep fighting despite the embarrassing showing on the battlefield.

He has vowed to “protect ourselves using all means available,” and at times hinted at being prepared to use nuclear weapons.

Antonio Guterres, the United Nations secretary-general, on Monday appeared downbeat about the prospect of peace talks between the two countries anytime soon.

“I do believe that the military confrontation will go on, and I think we will have still to wait a moment in which serious negotiations for peace will be possible. I don’t see them in the immediate horizon,” Guterres said in his final press conference of the year.

The war has also had ripple effects on the entire world. Ukraine is one of the world’s biggest grain producers, and the ongoing war has at times disrupted the supply chain and increased food prices — felt more acutely by poorer nations.

Besides, Europe’s efforts to cut off Russian energy has left the continent having to find alternate sources of gas. That has also meant much higher prices for consumers this winter, feeding into high inflation recorded around the world.

The United Kingdom has undoubtedly gone through a turbulent time in its politics with three prime ministers in the span of just months.

Boris Johnson resigned as prime minister and leader of the Conservative Party in July following revelations about parties held in Downing Street while the country was under lockdowns and COVID-19 restrictions. Additionally, there were allegations of sexual harassment against Chris Pincher, a Conservative member of Parliament whom Johnson had elevated to a key government position despite being aware of the accusations against him. This prompted the resignation of over 50 lawmakers from Johnson’s government and led to his downfall.

Following a leadership contest over the summer within the Tory Party, triggered by Johnson’s resignation, Liz Truss was elected prime minister in September. However, her unpopular economic plan spooked the markets and caused the value of the pound to tumble. Truss was eventually forced to resign in October, making her the shortest-serving prime minister in British history.

After Truss stepped aside, Rishi Sunak, a onetime Treasury secretary in Johnson’s cabinet and Truss’ leadership challenger over the summer, was picked to take over, making history as the first nonwhite British prime minister and the country’s first leader of South Asian descent.

Queen Elizabeth II died in September at her residence of Balmoral Cottage, in Scotland, at the age of 96. Elizabeth served on the throne for 70 years, making her the longest-serving monarch in British history.

Thousands of British citizens queued for long hours outside Westminster Hall to pay their respects to the late queen.

Her funeral was attended by over 2,000 people, including world leaders like Biden and French President Emmanuel Macron. Prince Harry and Meghan Markle — who have stepped down as working royals and have criticized the royal institution in a recent Netflix documentary series — traveled to the U.K. from America to attend the service.

While da Silva was in the lead in the first round, he did not manage to secure over 50% of the vote to win outright, which meant the two candidates headed to a runoff contest at the end of October.

Da Silva secured victory in the head-to-head contest by a narrow margin. But Bolsonaro has resisted accepting da Silva’s victory even as his supporters continue to protest the result.

Still, Bolsonaro’s loss has been cast as a rebuke of his four-year leadership, during which he attacked the country’s institutions and undermined Brazil’s democracy.

Da Silva previously served as president for seven years, from 2003 to 2010. He spent almost two years in prison but his corruption conviction was ultimately voided.

The world continued to be challenged by the COVID-19 pandemic into 2022. Yet, the development of vaccines and therapeutics has eased the effects of the virus and helped restore a degree of normalcy in some countries around the world.

The country, though, that has continued making headlines with its response to the virus is China. For most of this year, China stuck to its aggressive “zero COVID” policy, enforcing strict lockdowns and quarantine mandates as well as mass testing to stop the virus from spreading.

People took to the streets in late November animated by reports of a deadly fire in an apartment building in Urumqi, which had been under lockdown for months, in an unprecedented show of rebuke to the tough policies and Chinese President Xi Jinping’s leadership.

Authorities have since eased some restrictions but experts have warned of the risks of fully reopening the country given the potential toll such action could take on its health system amid a potential rapid rise in COVID-19 cases and deaths.

China has managed to keep its reported COVID-19 toll low so far, compared to other countries, recording over 10,088,555 cases and 31,278 deaths since January 2020, according to World Health Organization data as of Tuesday.

China has so far not authorized mRNA shots, such as the ones produced by Pfizer and Moderna, for use by Chinese citizens, instead relying on domestically produced vaccines that are viewed as less effective at preventing infection and severe disease.

Some of the more vulnerable populations, including the elderly, have also resisted getting vaccinated, with the government making efforts to increase uptake for those age groups.

Mpox, previously known as monkeypox, was declared a “public health emergency of international concern” by the World Health Organization in July.

Cases of mpox have been reported in 110 countries since Jan. 1, 2022. As of Dec. 20, the agency has recorded a total of over 83,000 mpox cases and 66 deaths. The WHO assesses the current risk of mpox globally as “moderate,” with weekly cases falling as of Monday.

The first case of the global outbreak was recorded in the U.K. in May. More infections were later identified in other countries, including the U.S.

Most cases have been found in gay men and men who have sex with men.

The U.S. declared its own public health emergency over the outbreak to be able to make resources, including vaccines, more readily available to those at risk — a strategy that appears to have been effective at containing the spread of the virus.

Earlier this month, the Department of Health and Human Services announced it won’t update the emergency declaration, which is set to expire on Jan. 31, 2023, citing the low number of cases in the country.

Devastating floods in Pakistan killed more than 1,700 people over the summer, swamping a third of the country and impacting 1 in 7 Pakistanis, according to the country’s foreign minister, Bilawal Bhutto Zardari. This single climate catastrophe cut the country’s growth in half and resulted in damages worth over $30 billion, according to Bloomberg.

Gutteres had urgently appealed to world leaders to support Pakistan, citing their own implication in the climate crisis.

“Pakistan has not contributed in a meaningful way to climate change, the level of emissions in this country is relatively low,” Guterres said in September. “But Pakistan is one of the most dramatically impacted countries by climate change.”

The U.N. is due to co-host a summit with Pakistan in January to bring together the international community to help spearhead the country’s recovery.

Widespread protests were triggered in Iran by the death of 22-year-old Mahsa Amini while in the custody of the country’s “morality police.” Amini was arrested in Tehran for allegedly not wearing her hijab properly.

Authorities claimed Amini died as a result of a heart attack but her family said she didn’t suffer from heart conditions. Angered by the reports, protesters took to the streets, calling out police brutality and the strict hijab mandate, among other things.

School girls also tried to lend the movement momentum by getting photographed taking off their hijabs and giving the middle finger to pictures of the country’s leadership.

Iran has been ruthless in its effort to stifle the protests. So far, at least 490 demonstrators have been killed, according to a report by the Human Rights Activists News Agency.

The agency added that of the 18,200 people arrested in connection to the protests, only 3,780 have been publicly identified. Last month, authorities announced 1,024 people had been charged in the country’s capital for protesting the government.

Shekari was hanged for allegedly injuring a pro-regime Basij paramilitary force member with a machete and blocking a street in Tehran. Rahnavard was accused of stabbing and killing two members of the paramilitary force.

Iranian courts sentenced 400 people to up to 10 years in prison over their participation in the anti-government demonstrations, just a day after Rahnavard’s execution. Amnesty International has identified 20 more people who are at risk of execution, 11 of which have already been sentenced to death.

Argentina clinched a victory over France in the final of the 2022 World Cup hosted in Qatar — in possibly one of the best games in the event’s history.

While Argentina was ahead by 2-0, two goals by French star Kylian Mbappé, including a penalty kick, turned the game around. The two teams played extra time, which ended in a 3-3 draw. Argentina’s win was determined by penalty shootout.

The title is the first World Cup the 36-year-old Lionel Messi has won in his career, and Argentina’s third trophy in the tournament. Messi made World Cup history by becoming the first player to score in the group stage and up to every stage of the knockouts in a single edition of the tournament.

This year’s World Cup was controversial given it was hosted in Qatar, a country with a poor human rights record. Thousands of migrant workers reportedly died during the construction of stadiums and other facilities for the popular sports event.

Besides, women in Qatar still need the permission of a male guardian to travel abroad, marry or study, among other things.

Homosexuality is illegal in the country, and even in some instances punishable by death. Players were threatened with yellow cards if they wore “OneLove” armbands in support of LGBTQ rights.

Sales of beer with alcohol at the stadiums hosting the game were also banned by Qatar at the last minute.

Despite the controversy, the decision to pursue and host the World Cup seems to have paid off for the country.