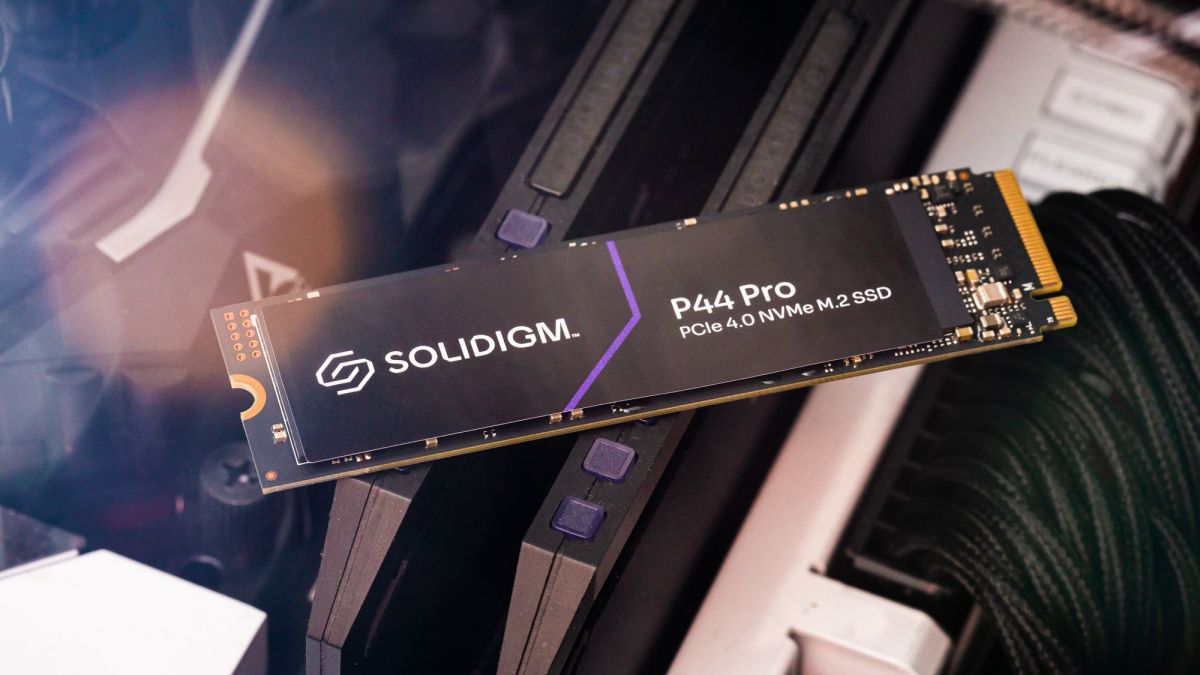 The Solidigm P44 Pro is an SK hynix Platinum P41 by another name. That drive was the fastest drive we had ever tested when it launched and is now just slightly surpassed by the much-more-expensive Samsung 990 Pro. By being under the Solidigm umbrella, the P44 Pro has access to a full software suite and also arrives with a significantly lower MSRP than the Platinum P41 at all capacities.

While there are some minor firmware tweaks, the overall performance remains about the same with the added benefit that this drive should see better global availability. Designed to compete with the best SSDs, the P44 Pro also lacks an option for a heatsink but is otherwise an excellent choice for most applications.

The Solidigm P44 Pro is available at 512GB, 1TB, and 2TB. This is slightly different from the Platinum P41 which had a bit more overprovisioning. In practice, this does not translate to any significant difference in the user experience. It’s the same amount of flash, with just a bit more available to the user with the P44 Pro. Maintaining some free space on any SSD is recommended and, in daily use, there will not be any apparent difference between these two drives. The MSRP is $79.99, $129.99, and $219.99 for the three launch capacities, all significantly lower than the Platinum P41.

Otherwise, the P44 Pro matches the specifications of the Platinum P41, with up to 7,000/6,500 MBps for sequential read and write. IOPS are not officially listed but theoretically it should hit the 1.4 million/1.3 million IOPS for read and write like the Platinum P41. AES-256 encryption is supported as is TCG Pyrite. Solidigm backs this drive with a 5-year warranty and 500TB, 750TB, and 1200TB of writes for each capacity. This is a PCIe 4.0 drive in the M.2 2280 form factor but will still work great in a 3.0 slot.

The Bootable Firmware Update Tool allows you to update Solidigm SSD firmware via bootable USB or optical media. The Solidigm Storage Tool also allows the updating of firmware, including with a command-line interface (CLI), but offers a GUI that details the health and features of the SSD.

The Solidigm P44 Pro looks almost identical to the Platinum P41. It’s a single-sided drive with a controller, DRAM, and two NAND packages.

Some minor changes are apparent with the power management circuitry, but such analysis is outside the scope of this review. More generally, it’s possible to have either a discrete solution using multiple components or something tighter with a power management integrated circuit (PMIC). There are differences in terms of cost and board space required, but the current PMIC supply crunch probably makes this drive’s design a bit easier to produce in numbers. Manufacturers like Phison make their own PMICs but generally are licensing out the controller as well.

For the full technical details of SK hynix’s controller and flash, please see our Platinum P41 review. The Aries is a powerful controller that raised IOPS performance to new heights, perhaps only beaten by Samsung’s Pascal on the 990 Pro. This level of performance is extraordinary for a consumer drive, but future developments such as Microsoft’s DirectStorage will be more demanding on SSDs.

Solidigm is using SK hynix’s LPDDR4 for the drive’s DRAM cache with 2GB of memory being plenty for a 2TB drive. We like seeing this amount of DRAM, and anything that can offer a bit of power savings is also welcome.

The flash is identical to that found in the Platinum P41: 176-layer TLC. This is generationally up-to-date and it will be some time before we see more layers in full production due to unfavorable market conditions.

Solidigm also has its own flash, such as the 144-layer QLC inherited from Intel on the P41 Plus, a situation that may confuse some, especially as SK hynix has demonstrated 176-layer QLC with a different architecture. Further confusion is brought on by the Solidigm P41 Plus having a similar name to the Platinum P41. With the P44 Pro, this finally goes away, but it may be best thought of as a wider-circulated Platinum P41.