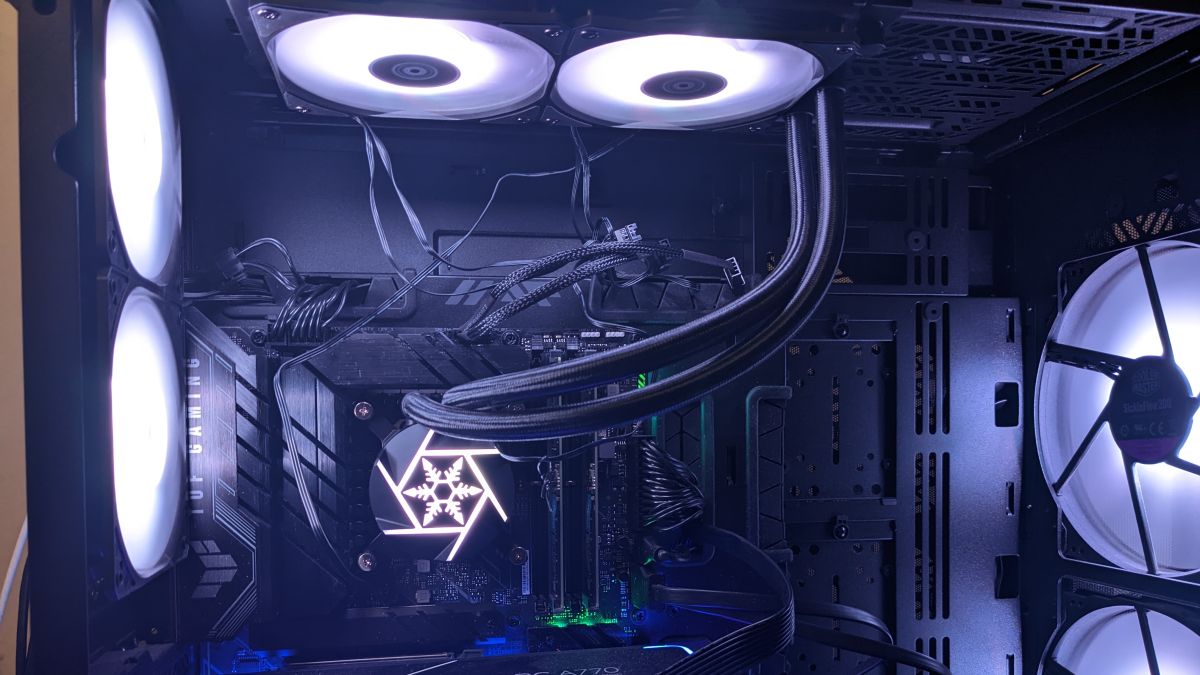 SilverStone has been churning out coolers, power supplies, expansion cards, and other PC equipment since its founding in 2003. The company is perhaps best known for its computer cases, like the SFF Sugo 14. But it also often offers niche products, like the SFF-focused Hydrogon H90 ARGB cooler we recently reviewed.

Here we’ll be looking at an SFF Cooler from SilverStone, the VIDA 240 Slim AIO – and giving it quite the challenge by pairing it with Intel’s Core i9-13900K. Will it wither under the heat of a high-TDP CPU, or will it rise to the challenge and possibly even earn a spot on our Best CPU Coolers list? We’ll have to put it through testing to be sure, but first lets look at the specifications from SilverStone.

SilverStone’s VIDA 240 Slim comes in a somewhat small box, with plastic, foam and cardboard used for protection of the inner contents.

Included with the package are the following:

Installing the VIDA 240 Slim was fairly simple. To begin, press the backplate to the motherboard and secure it by screwing in the standoffs. Next, apply the included thermal paste from the syringe to your CPU, then mount the CPU block and secure it with the included screws.

Features of the VIDA 240 Slim

The VIDA 240 Slim includes a hardware ARGB controller, which allows you to change the lighting settings of the fans and CPU block of the cooler with the click of a button – no need to download and install potentially buggy and bloated software!

Most liquid coolers today are based on Asetek designs which have the pump included in the CPU block. But Silverstone’s AIO features a unique three-phase, six pole pump motor integrated within the radiator. In theory, this design reduces overall noise levels.

Next to the pump, below the radiator tubing, is a refill port. This allows a user to service and refill the AIO without having to send it to the manufacturer for repair. In most cases you shouldn’t have to do this unless you hold onto this cooler for several years over multiple builds, but it’s nice to have the option.

The CPU block can be rotated, so that the orientation can be aligned to the preference of the user, or just to avoid bumping into buly RAM sticks.

There’s more to a cooler than just the heatsink and radiator. The bundled fans have a significant impact on both cooling and noise levels. Included are two slim 120mm fans, designed with nine pressure optimized blades for high static pressure and maximum airflow.

While it was fairly easy with previous generations of CPUs for coolers to keep the flagship i9 processor well under TJ max (the maximum temperature a CPU can sustain without throttling) in tough workloads, this is no longer realistically possible with the Core i9-13900K without extreme cooling (or enabling power limits).

Modern AMD & Intel CPUs are designed to run fairly hot without any problems– up to 95 degrees C for AMD Ryzen 7000 CPUs, and up to 100 degrees C for Intel’s Core i9-13900K. Similar behavior has been standard in laptops for years due to cooling limitations in cramped chassis.

Furthermore, Intel’s i9-13900K supports Adaptive Boost Technology (ABT), which allows the CPU to dynamically boost to higher all-core frequencies based on available thermal headroom and electrical conditions. This allows multi-core loads to operate at up to 5.5Ghz if the necessary amount of thermal dissipation is there. This feature works in a way that actively seeks high temperatures: If the chip sees that it is running underneath the 100-degree C threshold, it will increase its performance and power consumption until it reaches the safe 100C limit, thus sustaining higher clocks (and providing better performance) for longer periods.

The increased cooling challenges posed by Raptor Lake mean that we’ve had to change some of the ways we test coolers. Some coolers were able to pass Cinebench R23 multicore testing with Intel’s 12th Gen i9-12900K when power limits were removed (although only the strongest models were able to pass that test).

In addition to testing Cinebench without power limits enforced, we’ll also be showing results when the CPU’s power consumption is limited to a more reasonable 200W. We’ll also show results at 125W for those who prefer whisper-quiet cooling, at the cost of some performance. For both of these results, we’ll show traditional delta over ambient temperature results.

We’ll additionally provide noise level measurements recorded using a PSPL25 Sound Meter for all three power levels tested, to compare how much noise each cooler makes in different scenarios. We expect most coolers to run effectively silently at 125W.

You’ll notice that our noise level graphs start at 36 dBA – that’s because that is the noise floor in our testing environment. Keep in mind that noise measurements are logarithmic, meaning the differences between the noise levels of the coolers will be bigger than these graphs would suggest.

Note there are many factors other than the CPU cooler that can influence your cooling performance, including the case you use and the fans installed in it. A system’s motherboard can also influence this, especially if it suffers from bending, which results in poor cooler contact with the CPU.

In order to prevent bending from impacting our cooling results, we’ve installed Thermalright’s LGA 1700 contact frame into our testing rig. If your motherboard is affected by bending, your thermal results will be worse than those shown below. Not all motherboards are affected equally by this issue. I tested Raptor Lake CPUs in two motherboards. And while one of them showed significant thermal improvements after installing Thermalright’s LGA1700 contact frame, the other motherboard showed no difference in temperatures whatsoever! Check out our review of this contact frame for more information.