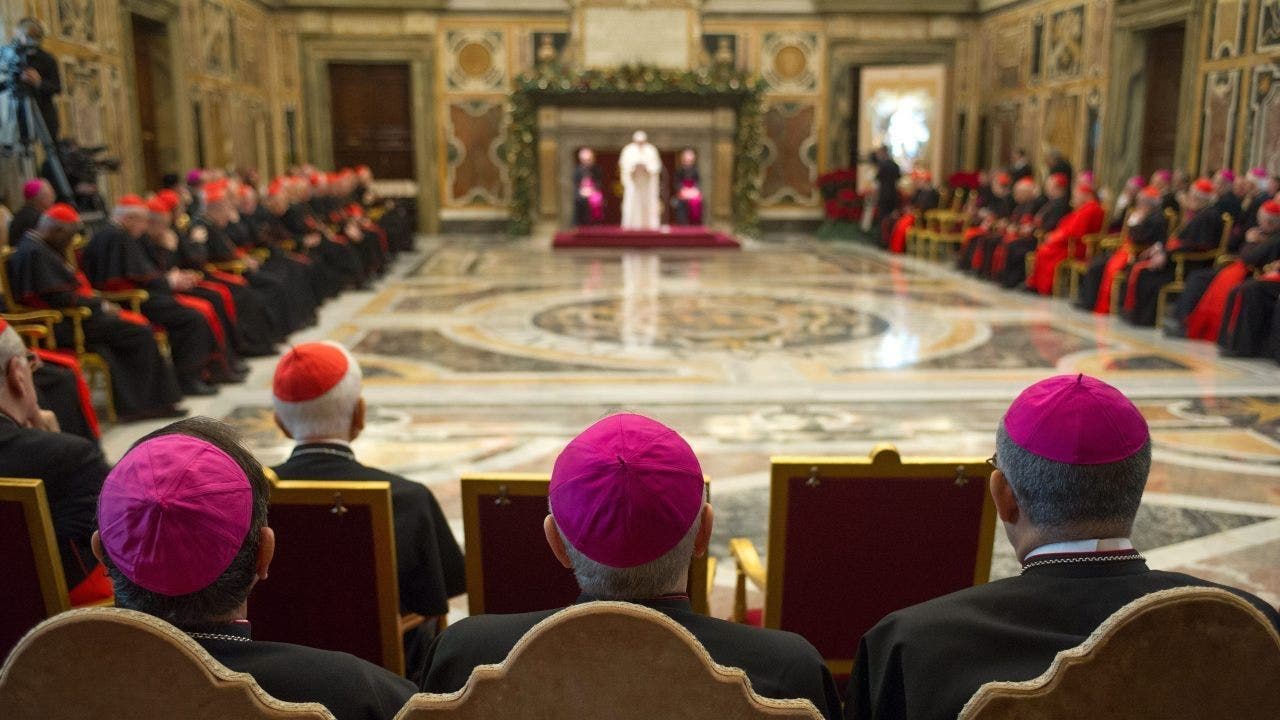 Pope Francis made a dire warning to the Roman Curia on Thursday, warning them to be ever vigilant of demons lurking in the Vatican.

The remarks were delivered as part of his Christmas address to the Vatican’s resident cardinals – a tradition that Pope Francis has turned into something of an annual airing of grievances for the Vatican-based prelates.

Pope Francis warned attending cardinals that those who live in the Vatican are often tempted to believe they are more enlightened or spiritually protected than others due to their status and rank in the church.

“We could easily fall into the temptation of thinking we are safe, better than others, no longer in need of conversion,” the pope told the cardinals.

But the pontiff rebuked this line of thinking with a stern warning, saying, “Yet we are in greater danger than all others, because we are beset by the ‘elegant demon,’ who does not make a loud entrance, but comes with flowers in his hand.”

People gather as Pope Francis recites the Angelus from the window of his studio overlooking St.Peter’s Square, at the Vatican, Sept. 11, 2022.
(AP Photo/Andrew Medichini)

“It is not enough to condemn evil, including the evil that quietly lurks among us,” Pope Francis instructed. “We need to respond by choosing to be converted.”

He continued, “Mere condemnation can give the illusion that we have solved the problem, whereas what really counts is making the changes that will ensure that we no longer allow ourselves to be imprisoned by evil ways of thinking, which are often those of this world.”

The pope quoted the Gospel of Luke’s warning that when an unclean spirit is driven out of a person, it returns with “seven more spirits more evil than itself.”

POPE FRANCIS DESCRIBES PRESSURES OF THE PAPACY: ‘SOMETIMES, YOU FEEL YOU ARE NUMB’

Pope Francis attends the annual Christmas greetings with the Roman curia at the Clementina Hall on Dec. 21, 2019, in Vatican City.
(Vatican Pool/Getty Images)

“Our initial conversion follows a certain pattern: the evil that we acknowledge and try to uproot from our lives does indeed leave us, but we would be naïve to think that it will long be gone. In short order, it comes back under a new guise. Before it appeared rough and violent, now it shows up as elegant and refined.”

He concluded that only a daily examination of one’s conscience and a will to combat evil influences over the mind can stop the cycle of corruption.

The Roman Curia is the main governing body of the Catholic Church, comprised of cardinals from countries around the world.

Pope Francis speaks in St. Peter’s Basilica at The Vatican during a Mass he celebrated for the newly created cardinals, Aug. 30, 2022.
(AP Photo/Andrew Medichini)

Pope Francis has been an outspoken critic of Vatican misconduct and spiritual corruption since taking the throne in 2013.

In 2015, he sent shock waves through the worldwide church with a list of 15 illnesses tearing apart the Roman Curia, including corruption, idolization of power and clerical careerism.