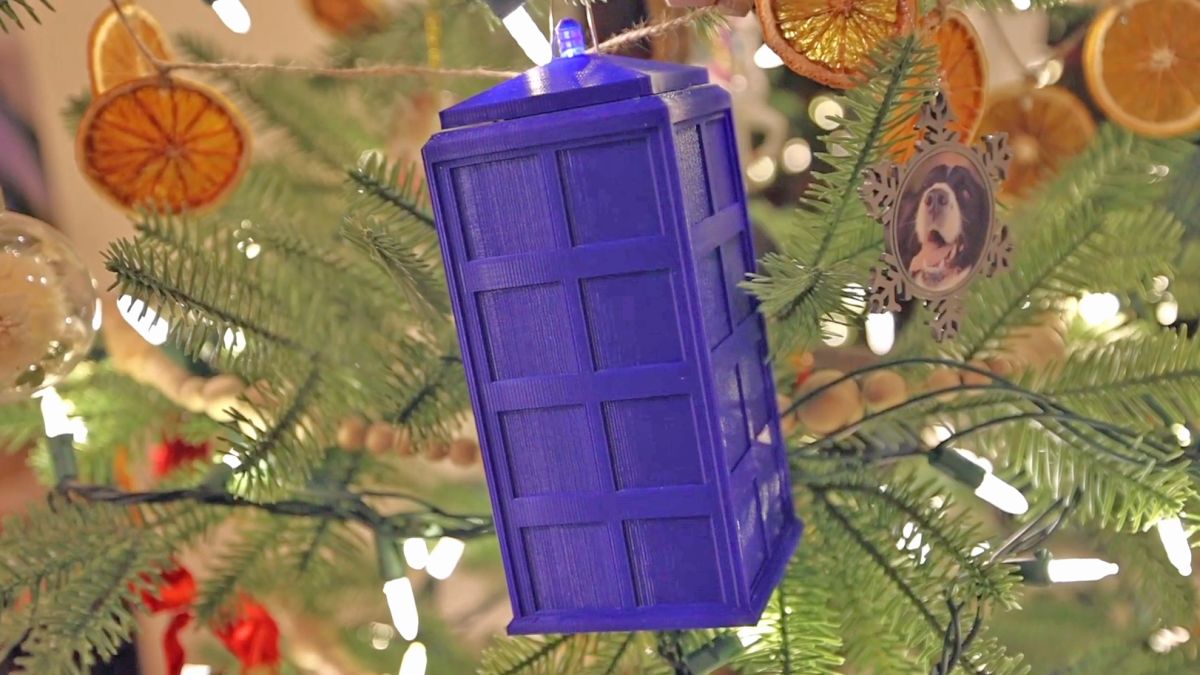 Most Christmas tree ornaments are made of simple plastic, wood or metal and the most intelligent thing they might do is light up or play music. However, Chris Bensen, the developer behind the world’s largest Raspberry Pi Cluster (opens in new tab), has made what could be the smartest ornament of all-time.

The blue, 3D-printed ornament, which is shaped like Doctor Who’s Tardis time machine, contains a tiny Raspberry Pi cluster that consists of two Raspberry Pi Zeros, which are each powered by a USB power bank. The Pis connect to a blue LED light that sits on top of the ornament and blinks just like the one on the “real” Tardis does when it’s in motion.

You can see how Bensen built the ornament in his YouTube video, embedded below.

In his video, Bensen shows how he built the ornament and lists the following parts.

Bensen has also posted the STL files for the 3D printed parts.

You can watch as Bensen puts the ornament together, soldering some wires (not named on the official parts list but you probably have them) to the GPIO on one of the Pi Zeros and connecting it to the resistor and the LED. He puts both Pis in a 3D-printed insert, which holds both of them and their power banks. He then inserts the insert and closes the whole thing up.

Once completed, the Tardis ornament looks great, but its outsides don’t show the complexity of the computers powering it. Bensen only shows it hanging on a tree with the LED flashing. However, since this is a cluster made up of two Linux computers, it has a lot more potential.

In a  Medium post about the project, Bensen writes, “what’s it do, that’s a good question. Right now it runs the same software I ran on the World’s Largest Raspberry Pi Cluster so watch the video and find out and comment what I should run on it.”

According to a Medium post on the subject (opens in new tab) from Bensen, the World’s Largest Raspberry Pi Cluster. which made its debut at Oracle Open World in 2019 with 1050 Rasberry Pi 3B+ boards paired together, uses Oracle Linux 9 as its OS. It runs a Docker container with a GraalVM running GraalPython.

Bensen now has the Pi Cluster in his garage where it’s operating as a server. It also has two Arduinos hooked up to it and runs a web service where the boards enable reset and power buttons while also lighting up some Neopixels.

So what do you think Bensen should do with the Pi-powered ornament? If it were us, we’d set it up as a public web server that provided a holiday greeting and allowed users to control the blue LED remotely. However, if those are really Raspberry Pi Zeros  and not Zero Ws, they won’t have a network connection.