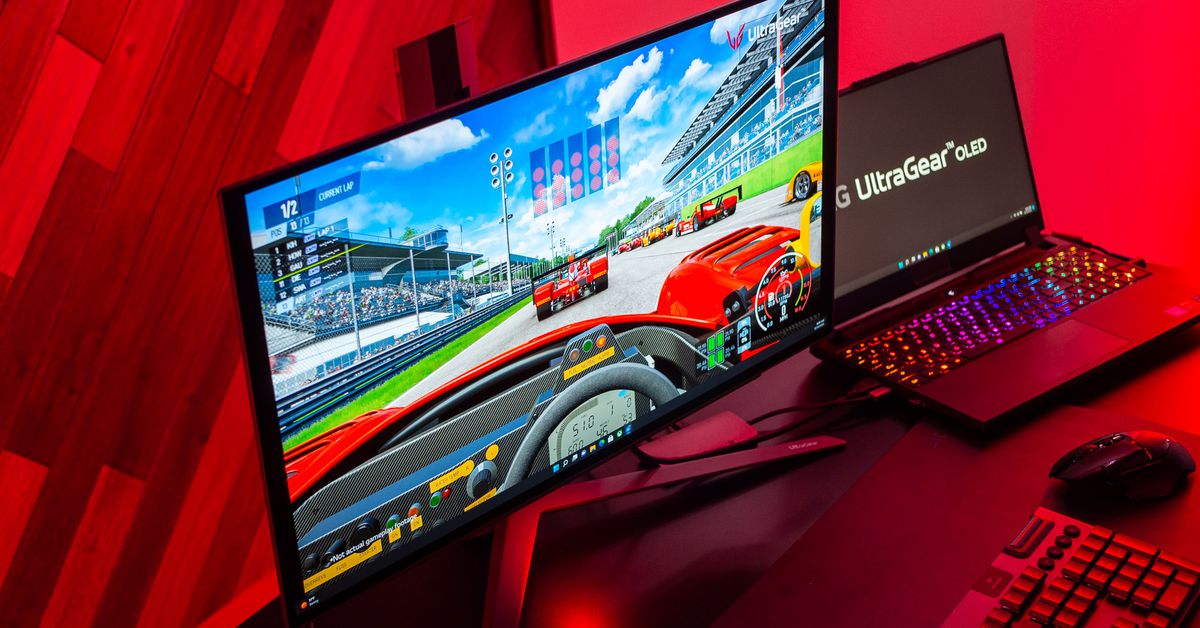 Thankfully, I don’t have to wait until CES 2023 in January to tell you about my experience seeing LG’s two esports-ready OLED gaming monitors. LG’s flat 27- and curved 45-inch UltraGear 1440p monitors are even faster than its TVs in terms of refresh rate and response time, and they look awesome.

In case you missed it, they just went on preorder this week, costing $999 and $1,699, respectively. The 27-inch model will be one of many options if you want an LG OLED panel, with riffs on it coming from companies like Dough and perhaps Asus. And LG’s 45-inch model uses the same display as the curve-it-yourself 45-inch Corsair Xeneon Flex that I got my hands on, but this is the first time I’m getting to see LG’s own fixed-curve version.

Given that LG’s OLED TVs have drastically shrunk over the past year (they now start at 42 inches), it seemed inevitable that LG Display would make OLED panels just for gaming. Now that they’re finally here, it’s the first time that gamers who want speed no longer have to sacrifice the visual quality of OLED. TN panels are still the quickest around, at the expense of resolution, viewing angles, and contrast — everything that OLED is great at — and while IPS Black and Fast IPS are catching up in some ways, OLED is still the best by a long shot with its virtually infinite contrast ratio and per-pixel brightness control.

It was fun to watch Valorant on LG’s OLEDs at a pre-CES 2023 press event this week, where I could appreciate its gorgeous, high-contrast art style and its fast, exacting gameplay.

I’m partial to the 27-inch version for a few reasons. First, it’s novel to see a 27-inch OLED, not just a “small” 42- or 48-inch OLED TV that, in reality, is still a tall desk hog with a terrible stand. It might be on the small side for some (not sure about you, but 27 inches is perfect for my studio apartment), and it looks so sharp running Valorant at QHD resolution that most people probably won’t mind that it isn’t 4K, like LG’s OLED TVs. Not to mention, QHD doesn’t require the latest GPUs to pull off.

I also like that the 27-inch model can pivot 90 degrees if you want your OLED in portrait mode (the 45-inch model can’t, though both can swivel 10 degrees to the left or right). If you’d prefer not to use the included stand, each monitor has a VESA 100 x 100 mount on its rear, so you can wall-mount it or attach it to a monitor arm. Both monitors have a pair of HDMI 2.1 ports and one DisplayPort 1.4 port.

The curved 45-inch model will have its admirers, but I’m a little spoiled by the Corsair Xeneon Flex, which puts an identical 45-inch OLED into a monitor that can go flat or curved with a concentrated push or pull of its two built-in handles. They have the same 21:9 aspect ratios, the same 240Hz refresh rate and 0.03 response time, but LG’s monitor is fixed at an 800R curvature. Their prices, however, are $300 apart, with the Xeneon Flex costing $1,999 and the LG model selling for $1,699.

Here’s an unsurprising revelation: I’ve seen many QHD monitors, but OLEDs can make practically any resolution look good (just look at the 720p Switch OLED, which is still, somehow, a treat to gaze at). The 27-inch UltraGear OLED makes content look far better than my similarly sized but much cheaper IPS monitor at home. In the short time with both monitors, text and images looked slightly more crisp on the 27-inch model, which is 110 pixels per inch (PPI, the higher density of pixels on the screen, the better) compared to the 45-inch, which is 84 PPI. Based on my experience with the 45-inch Corsair Xeneon Flex, games look great, but text can look a little pixelated.

Brightness is where traditional OLEDs can’t compete with LCD and high-end Mini LED-backlit monitors (Samsung’s QD-OLED panels, like the one used in Alienware’s 34-inch curved AW3423DW, close the gap by just a little bit). To disguise this limitation, LG put the monitors in a rather dark room that, unsurprisingly, made them look very bright.

We’ll have to see how it fares in the real world, but the spec sheets for both OLEDs claim a typical brightness level of just 200 nits. Each can display an HDR picture at up to 800 nits of brightness, but only across 3 percent of the total screen. If you, like most people, want to watch or play your HDR content in fullscreen mode, the peak brightness of the OLED panel as a whole will nosedive.

I’m glad that we’re finally getting more actual OLED gaming monitors — not TVs — in 2023 and from more companies than just LG. As I mentioned earlier, Dough and Asus will launch their own, Corsair’s Xeneon Flex is coming in early 2023, and CES 2023 will undoubtedly bring some huge gaming-related announcements from Samsung and other companies. If you’ve been saving your money for an OLED gaming monitor, 2023 will likely introduce a lot of options.

Photography by Cameron Faulkner / The Verge