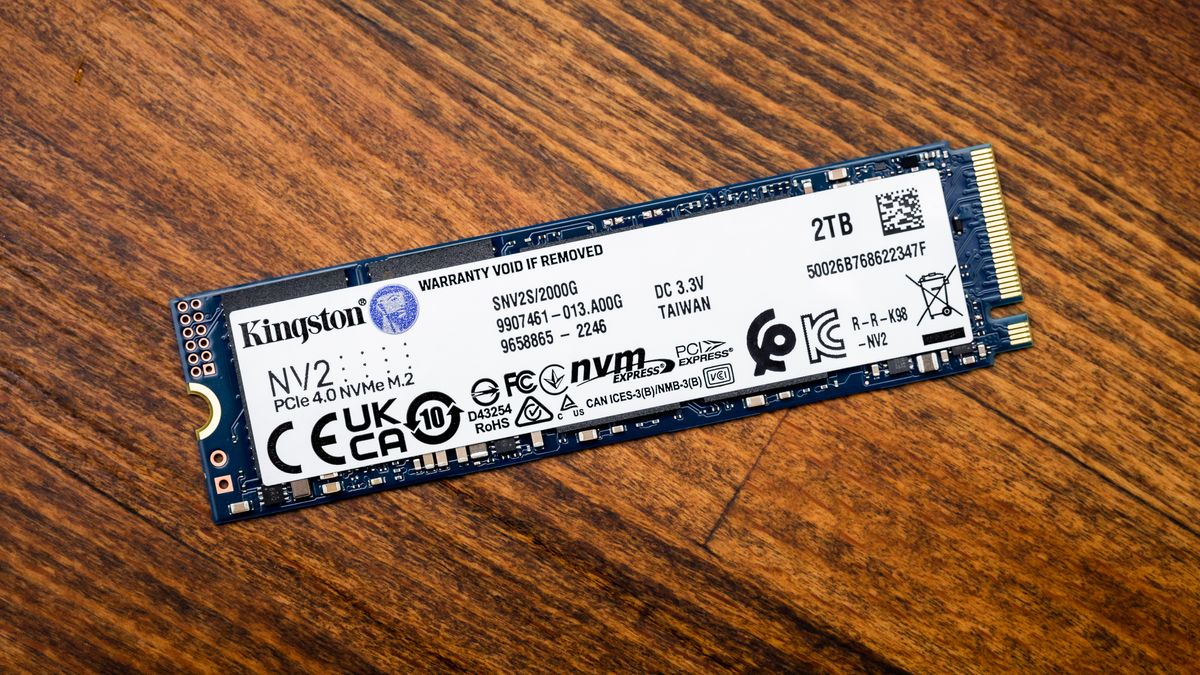 The Kingston NV2 is one of those SSDs that is just too good to be true. The price is exceptional, especially at 2TB, and it is sold as a PCIe 4.0 drive. Yet it has no definitive hardware inside and its performance for both of our samples is distinctly bottom of the barrel. It also runs a little hot and inefficient in our testing, too.

Miles behind the best SSDS, the NV2 may still make a good secondary or backup drive if your budget is absolutely strapped but it is not recommended for primary or laptop use. It is on the whole a good example of caveat emptor – buyer beware.

The NV2 follows Kingston’s previous NV1, a drive very much in line with Kingston’s philosophy of providing cheap drives at scale. The SATA-based A400 is the perfect example of this as it was a prevalent drive in cheaper builds. The NV1 followed suit and became more popular than it perhaps deserved. The NV2 is similar in that it uses a hodge-podge of hardware – different controllers and NAND flash from drive to drive – offered at an insanely low price. It should become commonplace especially in regions with limited SSD options. If you actually have solid alternatives, however, please look elsewhere.

The Kingston NV2 is available in 250GB, 500GB, 1TB, and 2TB. At the time of review, pricing for these capacities was $22.99, $34.99, $54.00, and $124.99, respectively. This drive is often on sale with the 1TB and 2TB SKUs becoming even better values. This drive is the A400 of NVMe drives and a fitting replacement for the NV1, which could be good or bad depending on how you look at it. In essence it is a dirt cheap NVMe SSD that meets the minimum requirements to get the job done.

The drive can manage up to 3,500 / 2,800 MBps for sequential read and write, respectively, but has no random performance specifications. This makes sense because it can come with more than one controller and more than one type of flash. The sequential write specifications are such that it can only have QLC at 1TB and 2TB, however. The sequential values are low for a PCIe 4.0 drive for a good reason: Kingston set them for the weakest possible controller and flash.

The NV2 has a 3-year warranty and can manage 320TB of writes per TB capacity. This is exactly as expected for a budget drive.

The Kingston NV2 is a barebones drive but Kingston does offer an SSD Manager on its site. This has typical SSD toolbox functionality and is able to display disk information and health, update drive firmware, and securely erase drives. It only works on Microsoft Windows.

Although we are looking at the 2TB in the photos here, mention will also be made of the 1TB because the flash and controller on the Kingston NV2 will vary from drive to drive. The 2TB drive is single-sided with a DRAM-less controller and four NAND packages. There’s not much to this drive but it should always be single-sided for where that matters.

The 2TB model we sampled is using the SMI SM2267XT controller. This is one of those entry-level PCIe 4.0 SSD controllers that barely qualifies for the 4.0 moniker. It’s similar to the Phison E19T controller used on drives like the WD Black SN750 SE or the Inland TN436. This technology has a 1200 MT/s bus which, with four channels, means it can saturate a x4 PCIe 3.0 link, much like the controllers on the SK hynix Gold P31 and WD Blue SN570.

For all purposes this makes the controller a jacked-up SM2263XT with higher bandwidth and IOPS but not really new technology like the SM2269XT. This performance requires a much higher core clock rate. This means the power efficiency should be fairly terrible for a budget drive when compared to other, newer PCIe 4.0 DRAM-less options like the HP FX900 and Silicon Power UD90.

Our 1TB sample also uses the SM2267XT, but this drive has been spotted with the newer SM2269XT as well. Given the limited performance specifications, it’s possible this drive could also come with the comparable E19T as well. Other, faster controllers closer to the SM2267XT, such as the InnoGrit IG5220 and Phison E21T, are also technically possible.

Four 512GB NAND modules with four 128GB dies deliver a total of 2TB. This is Intel’s 144-layer QLC. This flash is used on the Intel 670p and Solidigm P41 Plus. It remains arguably the best QLC on the market but is still QLC.

Our 1TB sample arrived with Kioxia 112-layer BiCS5 TLC, instead, but QLC is a possibility at that capacity.