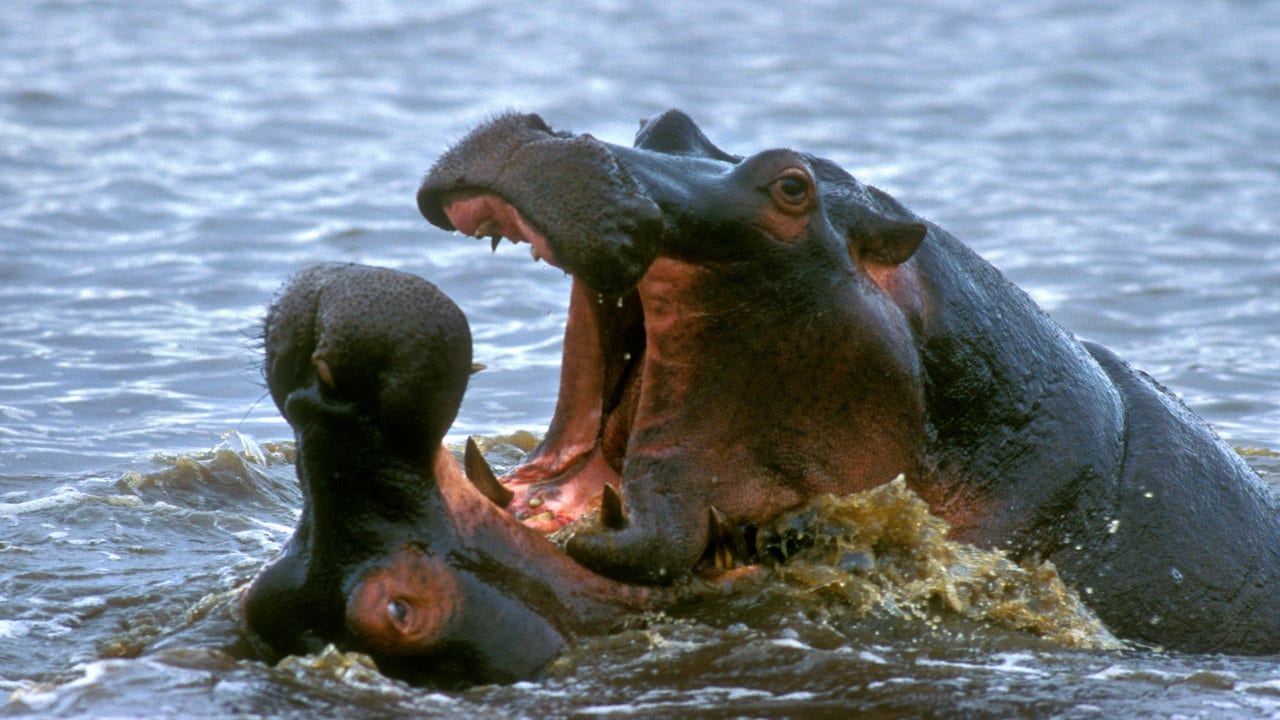 A two-year-old boy is safe and has made a full recovery after a brave bystander rescued him from the jaws of an angry hippopotamus. The boy was nearly swallowed whole before he was rescued, Uganda police said.

The hippo attack occurred on Dec. 4, at around 3:00 p.m. near the boy’s home on the shores of Lake Edward, in the Kasese District in western Uganda. The area is located within Queen Elizabeth National Park, home to several lakes and nature preserves and a popular tourist destination.

Uganda police said the boy, Iga Paul, was playing outside his home when a hippo strayed out of Lake Edward and attacked him.

The hippo seized the boy from the head and swallowed half of his body, according to police.

Hippopotamuses in the Victoria Nile near the Murchison Falls, one of the majestic natural sites in Africa at Murchison Falls National Park, northwest Uganda, on Jan. 25, 2020.
(YASUYOSHI CHIBA/AFP via Getty Images)

But a bystander, Chrispas Bagonza, witnessed the attack and rushed to the boy’s aid. He threw stones at the hippo and scared the animal, causing it to release Paul from its mouth, police said

The boy was immediately rushed to a nearby medical clinic. He was treated for injuries on his hand and later transferred to Bwera Hospital for further treatment. He made a full recovery and was discharged from the hospital and returned to his parents after receiving a vaccine for rabies, authorities said.

“Although the hippo was scared back into the lake, all residents near animal sanctuaries and habitats, should know that wild animals are very dangerous,” Uganda police warned. “Instinctually, wild animals see humans as a threat and any interaction can cause them to act strangely or aggressively.”

Hippos are notoriously aggressive and are in fact the deadliest large land mammal on the planet, killing an estimated 500 people each year according to National Geographic. Despite their docile appearance and huge size – adult hippos can weigh up to four tons – they can run up to 20 miles per hour and are excellent swimmers. Their jaws can open to 180 degrees and chomp down with a force 10 times the strength of human jaws, with sharp teeth that can grow to more than one and a half feet long.

Though they are herbivores that mainly feed on short grass, some studies have reported instances of hippos eating meat when food is scarce, according to the Exclusive African Safaris website.

“There are many other cases where it is said that they violently chop down on the meat as a way of ‘killing’ the animal that has disturbed them,” the website states.

Hippos can be found at various national parks in Uganda.

Chris Pandolfo is a writer for Fox News Digital. Send tips to chris.pandolfo@fox.com and follow him on Twitter @ChrisCPandolfo.