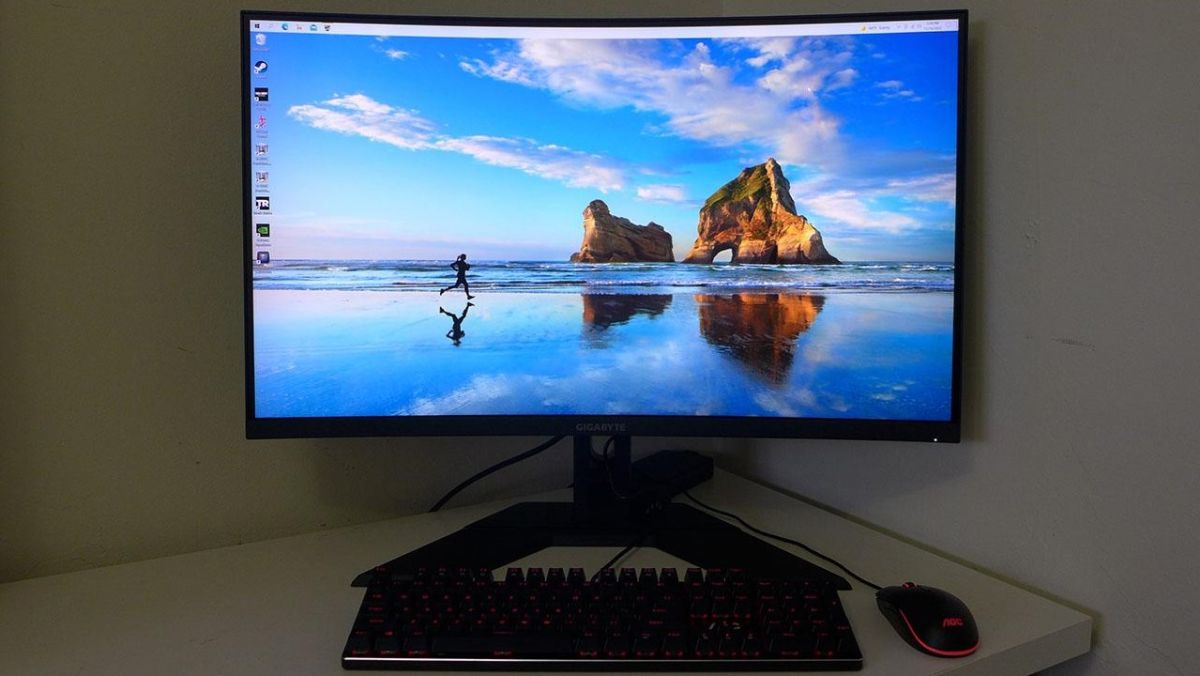 4K 144 Hz gaming monitors have been a popular item lately, with new models appearing almost weekly. I’ve reviewed many of them, and aside from the high-end full-array and Mini LED backlight panels, they are often difficult to differentiate. Only small differences in color accuracy and gaming performance can be found. This is good for consumers because it’s hard to find a bad display. They all perform roughly the same, with the best earning a spot among the Best 4K Gaming Monitors.

What I haven’t seen much of in this category are monitors using VA technology. When I unwrapped the Gigabyte M32UC and saw its curved VA panel, I immediately thought, “how many of these have I tested before?” The answer is surprising. I only found one other example, the 43-inch Asus XG43UQ, which has a flat panel. That begs the question, “Is a 43-inch screen a desktop monitor?” It depends on the desktop, of course. The M32UC is a 32-inch curved screen definitely suited for desktop use, so let’s take a look.

In the vast sea of 4K gaming monitors, the M32UC stands out with more than double the contrast of any IPS panel. I measured over 2,300:1 right out of the box, which is a difference that’s easy to see in a side-by-side comparison. The only downside is that there’s no dynamic contrast option for HDR content. As a result, that material shows roughly the same dynamic range. It looks very good, but there is upward potential.

The M32UC includes the now-obligatory wide color gamut with around 85% coverage of DCI-P3. That’s an average figure, but some newer screens boast 95% and a few have surpassed 100%. Luckily, Gigabyte has tuned the M32UC to provide accurate color without calibration. In a picture mode oddly labeled “Green,” you can enjoy the monitor without making adjustments. Just set the brightness to your taste. VA panels aren’t known for high brightness in smaller form factors, but the M32UC has earned VESA DisplayHDR 400 certification, and my sample measured around 500 nits peak.

Gaming performance has been given plenty of care and attention; in addition to the 144 Hz refresh rate, an overclock option takes the max speed up to 160 Hz. However, one caveat is that you can’t use Adaptive-Sync when overclock is engaged. Also included is Aim Stabilizer Sync, which is Gigabyte’s term for backlight strobing. The M32UC allows the strobe and Adaptive-Sync to be active at the same time. Most monitors force you to choose one or the other. If you prefer a traditional overdrive, that’s here too, and it is effectively implemented. Both Nvidia G-Sync and AMD FreeSync are supported, but the M32UC has not been certified by Nvidia.

Gaming features are packed in with aiming points, timers, frame counters and Gigabyte’s Dashboard that shows CPU and GPU information on the screen in real-time. KVM is part of the enhancement suite with USB-C, one upstream and three downstream USB 3.2 ports, and a KVM wizard that makes binding USB and video inputs a breeze. A dedicated button next to the OSD joystick quickly switches between connected systems.

So, we’re looking at a somewhat unique 4K monitor with a whole bevy of features and the promise of high performance and premium image quality. Impressively, the price for the M32UC at this writing is just $599.

Assembly and Accessories for Gigabyte M32UC

For being a somewhat special monitor, the M32UC’s carton is the opposite. It’s about as close to a plain brown wrapper as it gets. A look at the badges on the side provides a hint of the contents. The base bolts to the upright to assemble the monitor, then the panel snaps on top.

If you’d rather use an arm, a 100mm VESA mount sits in the back (fasteners are not included). The accessory bundle includes DisplayPort, HDMI and USB cables, and there’s a large external power supply with cords for three different wall outlet types.

Styling is simple and elegant, with nothing showing in front except the word “Gigabyte” printed on a narrow bit of trim. The top and sides of the screen bezel are flush, 10mm wide, and disappear when the power is off. The panel has a thin profile on its top half with a component bulge at the bottom. The curve is 1500R with no image distortion, but the wrap effect is palpable. It’s a good balance, given the large screen area and 16:9 aspect ratio. Compared to a 21:9 monitor, that extra height is a benefit.

You won’t find any LED lighting on the M32UC’s backside, but a polished upper area repeats the Gigabyte logo. The remainder of the cover has a perforated texture to offset a trapezoidal shape around the stand’s attachment point. Below that is a clearly labeled input panel with one DisplayPort 1.4, two HDMI 2.1, USB-C, USB 3.2 (one up, three down) and a 3.5mm headphone jack.

The stand offers -5/20 degrees of tilt and a 100mm height adjustment but no swivel or portrait mode. It’s a solid piece with rugged build quality and firm movements that belie the M32UC’s relatively low price point.

The M32UC has a huge OSD with many picture modes and options for just about every image and gaming parameter. It’s all controlled by a single joystick on the back right of the panel. The KVM feature is accessible in the menu or by pressing a dedicated button. Also available is Gigabyte’s OSD Sidekick app, a free download, that mimics the OSD and lets you design custom aiming reticles.

The Gaming menu starts things off with a four-level overdrive. SmartOD is the best option as it varies the rise and fall with the refresh rate making it adaptable. The other settings are fixed and produce some ghosting (either white or black) behind moving objects. Alternatively, you can engage Aim Stabilizer Sync, which uses a backlight strobe to reduce motion blur. It improves motion resolution, but I saw slight phasing artifacts when using it. It also reduces brightness by around 60% with no compensation available. I recommend sticking with SmartOD and Adaptive-Sync only.

And there’s the overclock, which is hidden in the Display menu. While the attraction of a 160 Hz 4K monitor is strong, there’s a sacrifice: you can’t use Adaptive-Sync. And you’ll need it at these framerates. I’ve only been able to live without it when playing over 200fps and no 4K monitor that I have reviewed can do that.

There are 10 picture modes available, with the default set to “Green.” Rest assured that it is not actually green, but I’m not sure what Gigabyte is thinking here. However, it’s reasonably accurate out of the box with no need for calibration. If you want or need the smaller sRGB gamut, there’s an accompanying mode that is also quite accurate. In Green, you can calibrate the white point and choose a gamma preset.

The M32UC makes the most of its large screen with Picture-In-Picture and Picture-By-Picture features that let you view two video sources simultaneously.

One interesting addition to the OSD is a size option. By default, it’s quite large, making it easier to read from across the room (although it’s a pity that no remote is included). If you’d rather keep the menu small, choose the 1x setting. When you’re done tweaking, save the settings to one of the three memories for later recall.

The KVM feature is easily managed by a graphic that appears when you press the joystick and click left. Switching connections is accomplished by pressing the KVM button on the back. Also, a click of the joystick away is GameAssist which has aiming points, timers and a frame counter.

Custom reticles can be created using OSD SideKick. The Dashboard is something unique to Gigabyte and Aorus monitors. With a USB connection, you can monitor CPU and GPU information on the screen in real-time. You can also set which parameters you’d like to view from the options shown in the photo above.

Calibration of the M32UC is optional. In the default Green picture mode, grayscale, gamma and color accuracy is good enough that nothing is needed except to set brightness to taste. For even better performance, you can adjust a set of RGB sliders and choose a gamma preset.

On the default setting of 2.2, I measured closer to 2.3, which makes the picture a tad darker. This is OK for a VA monitor, thanks to its higher native contrast. You can operate at a slightly higher brightness level and still enjoy deep blacks. If you want a lighter look, set gamma to 2.0 for an actual value of 2.10. You can switch back and forth without changing the white point, which is a good thing. The settings I used for testing are below.

HDR mode doesn’t offer a calibration option, but there are three additional picture modes, HDR, HDR Game and HDR Movie. HDR is the default and best option though I could see only the tiniest differences between them. You can also adjust white and black clipping for each mode. I don’t recommend changing these settings from the defaults lest you lose some fine highlight or shadow detail.

Gaming and Hands-on with Gigabyte M32UC

I’ve reviewed several 4K monitors recently that deliver superb response and low input lag. The Gigabyte M32U is slightly quicker than those. I saw this both in testing and in gameplay. Once I dialed in the mouse response settings in Doom Eternal and Call of Duty WWII, I felt nearly unstoppable. I had precise aim and movement that seemed to precede my thought process. Though I’ve played on faster displays, this one has a feel that’s on par with the very best.

Frame rates stayed between 110 and 120fps when playing Doom Eternal at full resolution with HDR. There was no benefit to the overclock since I couldn’t reach 144fps, let alone 160fps. And the loss of Adaptive-Sync is something I could see. Frame tears were rare but occasional. The overdrive worked superbly with tack-sharp motion resolution and no jitter or smearing. The backlight strobe is viable if you can adapt to the darker image. And Adaptive-Sync remains active, which is something few monitors can do. I saw slight phasing artifacts when objects moved against contrasting backgrounds. My personal preference was to leave it off and rely on the overdrive.

Image quality was stunning in SDR mode with rich color and excellent contrast. Blacks are visibly deeper than what an IPS screen can produce, with fine shadow detail that was clearly rendered. HDR was a bit disappointing though. Like other monitors with no dimming feature, the M32UC has the same dynamic range for SDR and HDR. In practice, bright HDR images look good with sharp highlights and saturated color. But darker scenes, like the stealth train mission in Call of Duty WWII lack impact. The detail is there, and you can see everything clearly, but blacks aren’t truly black; they’re a dark gray. Nighttime sequences left me a bit flat.

From a physical perspective, the M32UC is a compelling choice. The curve helps bring the sides of the picture into better focus. And though it isn’t as wide as a 21:9 34-inch display, it’s a good bit taller, which makes seeing into the distance easier. You can spot enemies from farther away. There aren’t many curved 16:9 screens with 4K resolution, so that alone is a reason to put this monitor on your shortlist.

The traditional aspect ratio is also well-suited for work. When editing documents or graphics, the curve isn’t a factor, positive or negative. Its ability to not call attention to itself makes the M32UC a very useful and flexible display capable of just about anything. It’s a gaming monitor for sure, but one that can be your only monitor too.