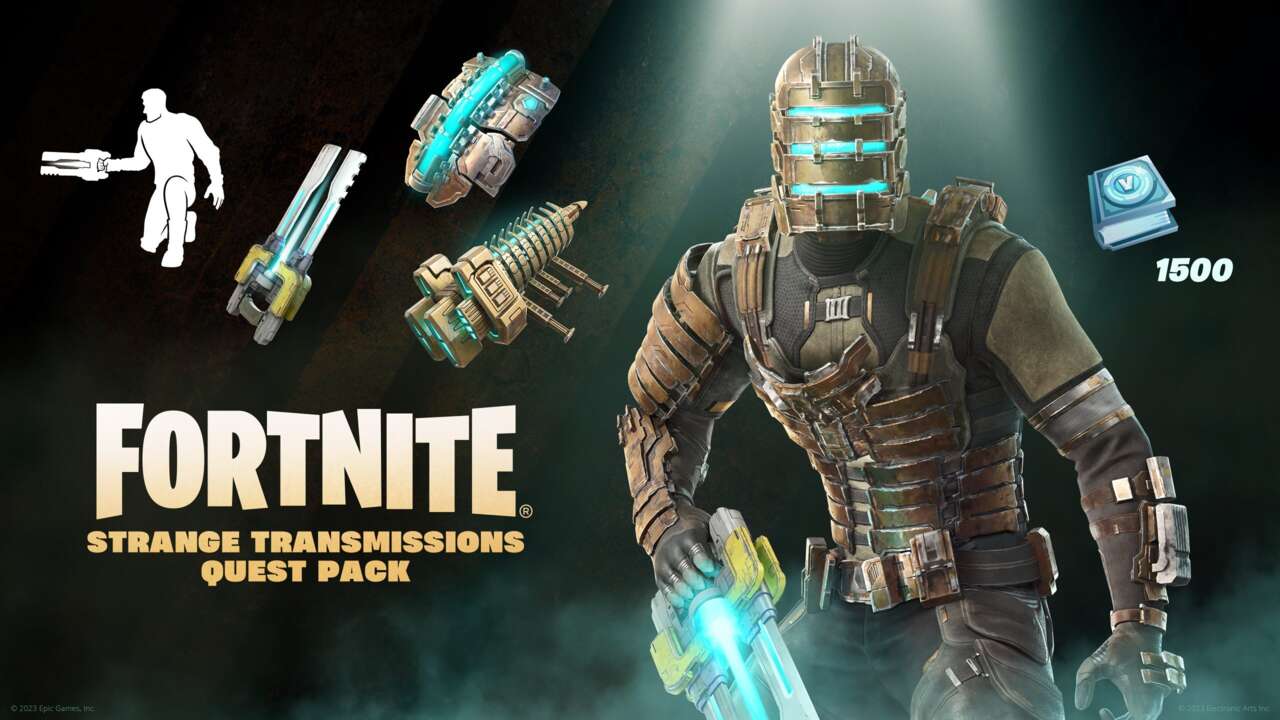 The holidays may be over, but ’tis still the season for new Gaming Legends outfits in Fortnite. Chapter 4 kicked off with the reveal that the Doom Slayer and The Witcher, Geralt of Rivia, would be included with the Season 1 battle pass, and now we also have the very traumatized space engineer Isaac Clarke to celebrate this month’s remake of the original Dead Space game. Considering what he goes through in those games, a trip to the Fortnite island for Isaac will be like a relaxing vacation from cutting off all those necromorph limbs.

Isaac comes in a bundle that costs real money rather than V-Bucks–it’s one of the few collaboration sets like that, and the first Gaming Legends one. But don’t worry, the value of this pack is pretty great. For $12, you get the Isaac Clarke skin, two reactive back blings (including his iconic RIG that shows your health meter, and a model of the USG Ishimura), a Plasma Cutter pickaxe, and some V-Bucks for good measure.

The Cutter comes with a nice little convenience feature as well: an emote that you can use to conjure the weapon in the heat of battle even if you have a different pickaxe equipped, akin to the emotes for Doctor Strange’s magic sword or Wolverine’s claws.

But the value of this pack isn’t just in the cosmetics themselves. Buying this bundle will also net you the Strange Transmissions quests, which will grant you a total of 1500 V-Bucks for completing a few days worth of daily bonus goals.

While Geralt of Rivia is included with the Chapter 4 Season 1 battle pass, he isn’t yet available in the game itself. Geralt is in this season’s “bonus” skin slot, meaning we have to wait until further in the season to unlock him via quests. His countdown timer says we’ll be able to get him in two weeks–but sometimes these quests unlock sooner than the timer indicates.

Fortnite’s collection of Gaming Legends skins has gotten quite hefty since the first one, the Psycho Bandit from Borderlands, debuted in 2019. Most of them, like the Street Fighter, Halo and Destiny sets, still appear in the item shop periodically. But Lara Croft, like Geralt and Doom Slayer, was also featured in a battle pass and won’t return for sale. Kratos and the Psycho Bandit were sold in the item shop and could return at any time, but neither has been available in years.

As a money pack, Isaac Clarke could appear in the shop as often as every few months–Epic frequently rotates these sorts of V-Bucks quest packs through the shop. But these money packs are also sold at retail as physical cards with codes on them, so it could be possible to purchase this pack from third-party storefronts, or brick-and-mortar stores like Target or Best Buy, even after they stop selling him in the Fortnite item shop.