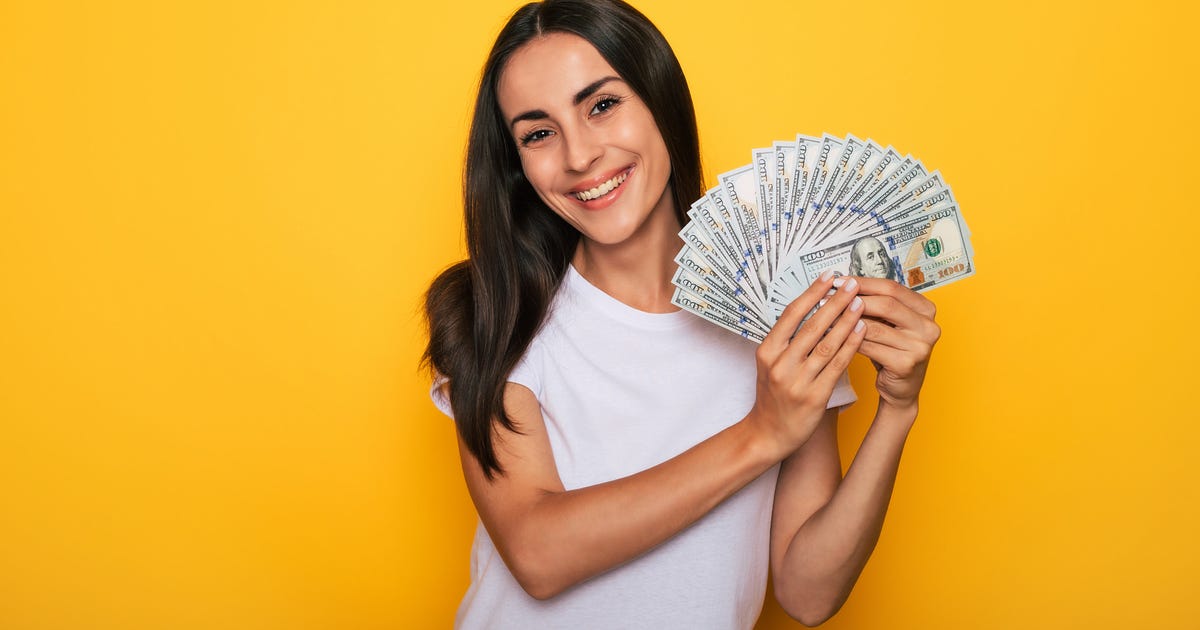 The year is coming to an end but numerous states are still issuing tax refunds and stimulus checks announced in 2022.

Massachusetts only began returning $3 billion in surplus tax revenue to residents in November and South Carolinians will continue getting printed checks, debit cards and direct deposits of up to $800 through the end of the year.

Your state could be sending out a rebate or stimulus check, too. See if you qualify and how much you could be owed.

For more on tax credits, see if you qualify for additional stimulus or child tax credit money.

Millions of Californians are receiving inflation relief checks of up to $1,050, either as a direct deposit or a debit card. The state expects 95% of the payments to go out this year, with the remaining checks reportedly arriving by Jan. 15, 2023.

How much California residents will receive is based on their income, tax-filing status and household size.

Single taxpayers earning $250,000 or above and couples earning a combined $500,000 are ineligible for the payments.

Gov. Jared Polis signed a bill in May to get the refunds to taxpayers sooner, with more than half already cashed by late August. Filers who received an extension and filed by the Oct. 17 deadline will receive their refund by Jan. 31, 2023.

After Gov. John Carney approved the Delaware Relief Rebate Program in April, a $300 stimulus check was cut for all residents who filed their 2020 tax returns.

Even if you filed jointly, each person should have received a payment, which started going out in May.

Nearly 60,000 Florida families received one-time payments of $450 per child “to offset the costs of rising inflation,” according to Republican Gov. Ron DeSantis.

To qualify, families must receive Temporary Assistance for Needy Families (also known as welfare), be a foster parent or a relative or nonrelative caregiver or participate in the Guardianship Assistance Program.

You didn’t need to apply for the benefit, which has been automatically mailed to eligible recipients. According to the Florida Department of Children and Families, checks should have arrived in time for Florida’s “back to school” sales tax holiday, held from July 25 to Aug. 7.

Gov. Brian Kemp signed a bill in March authorizing rebates to taxpayers who filed their state returns for both 2020 and 2021. Single taxpayers received $250 in May, with heads of households getting $375 and married couples filing jointly netting $500.

Partial-year residents, those who pay little or no income taxes, or individuals who owe taxes, child support or other payments may have received a smaller rebate.

The Department of Revenue started issuing rebates in May and, according to its website, most residents who filed their 2021 state return by April 18 should have received theirs by early August.

Direct deposits began being issued in late August, but physical checks didn’t start going out until the week of Oct. 17, according to the state Department of Taxation.

Taxpayers who file their 2021 state tax returns between July 31 and December 31, 2022, should receive direct deposit up to 10 weeks after their return is accepted by the tax department, or 12 weeks if they requested a physical check.

Gov. Brad Little signed a bill in February giving $75 to each taxpayer and dependent, or 12% of their 2020 state income tax return, whichever is greater.

Checks started going out in March and residents can review the status of their rebate online.

Illinois’ $1.83 billion relief package includes income and property tax rebates that should be going out through November.

Illinois residents who paid state property taxes in 2021 and meet certain salary requirements are also eligible for a separate rebate of up to $300.

Checks started going out the week of Sept. 12, the Illinois Department of Revenue told CNET in an email, with distribution expected to finish roughly eight weeks later.

Democratic Gov. J.B. Pritzker’s Family Relief Plan also included several tax holidays and rebates, including a suspension of the state’s sales tax on groceries from July 1, 2022, through June 30, 2023, and a permanent expansion of the earned income credit from 18% to 20% of the federal credit.

Hoosiers are eligible for $125 rebates regardless of income, thanks to the state’s automatic taxpayer refund law,

Direct deposit payments started going out in May with printed checks slated to be sent to the 1.7 million taxpayers who didn’t provide banking information in July. Dispersal was held up until mid-August, Gov. Eric Holcomb told Fox 59, “because the paper supply required was delayed.”

During the wait, the Indiana Legislature tacked on another $200 to each check.

The combined payments — $325 for individuals, or $650 for married couples filing jointly — will be included in one paper check. It took until early October to print all 1.7 million paper checks.

Indiana residents who haven’t received a rebate by Nov. 1 should contact the state’s Department of Revenue.

Maine taxpayers who have filed their 2021 state tax returns and have an adjusted gross income of less than $100,000 were eligible for an $850 direct relief payment this year. Couples filing jointly received a single payment of $1,700.

Checks were sent out starting in July, WMTW reported. You can check on the status of your refund via Maine’s government portal.

Under a 1986 voter-approved law known as Chapter 62F, state tax revenue in Massachusetts is tied to fluctuations in wages and salaries, with any excess returned to taxpayers. This year marks only the second time since the law was enacted that the refund has been triggered.

The first checks and direct deposits from the $3 billion surplus started going out Nov. 1 and more will be issued until about mid-December, the administration said.  The refund is equal to approximately 14% of an individual’s 2021 state income tax liability.

If you filed your 2021 state tax return after Oct. 17, 2022, you expect to receive your refunds approximately one month after your file date.

A website has been launched to answer questions and help residents get an estimate of their refund. A call center is also available at 877-677-9727.

Almost 1.2 million workers applied for Minnesota’s frontline bonus check by the July 22 deadline, per the Duluth News Tribune. The large number of applicants who are approved — if more than 667,000 — could shrink the $750 payout.

Applicants should have been notified in mid-August, with payments beginning Oct. 5.

Some 2 million New Jersey households are getting property tax rebates, thanks to the Affordable New Jersey Communities for Homeowners and Renters (ANCHOR), a $2 billion property tax relief program signed by Gov. Phil Murphy at the end of June.

The rebates, issued via check and direct deposit, will be coming later than many other states’ payouts: New Jersey state treasury spokesperson Jennifer Sciortino would only confirm it would be “no later than May 2023,” Patch.com reported.

The Land of Enchantment issued a rebate to all taxpayers — $500 for individual filers and $1,000 for joint filers, heads of households and surviving spouses.

The payments were broken into two parts: The first checks went out in June, and the second in August.

The state also issued $250 rebates in July to taxpayers who filed individually and earned less than $75,000. (Married couples filing jointly with incomes under $150,000 received $500).

In June, about 3 million New York state homeowners started receiving property-tax rebates of up to $1,050. New York City households got an average of $425 back.

Those who qualified should have automatically been sent a check by the end of June, but details on eligibility are available at the New York State Department of Taxation and Finance website.

Owners of one, two, or three-family residences who had incomes of $250,000 or less in 2020 are eligible for the rebate, provided the property is their primary residence.

Homeowners who received a School Tax Relief (STAR) credit or exemption during the fiscal year 2023 will be sent checks automatically starting in late August. (If the Department of Finance has incomplete income information, it will send a letter detailing how to certify your eligibility.)

Owners who do not receive a STAR exemption but believe they are eligible for the rebate will be able to file an application. The deadline for filing a claim is in November, and those rebate checks should go out in the fall.

In July, more than 260,000 older homeowners, renters and people with disabilities started receiving their part of a massive $121.7 million payout issued through the Property Tax/Rent Rebate Program.

Eligible residents should visit the MyPath website or file a paper application before the extended deadline of Dec. 31, 2022, with payments coming as a direct deposit or check.

Check the status of your rebate using the state government’s Where’s My Rebate? tool, inputting your Social Security number, date of birth and the year you are claiming for.

Thanks to a budget surplus, Rhode Island taxpayers with families are receiving a one-time Child Tax Rebate of $250 per child (up to $750 for three dependent children), thanks to a state budget surplus.

Checks started going out in October, according to Rhode Island’s Division of Taxation, but residents who received an extension to file their 2021 state tax returns by October 2022 should receive their rebates starting in December.

You can check your Child Tax Rebate status on the Division of Taxation website.

Income tax refund checks of up to $800 started going out to South Carolina taxpayers in November. Any resident who paid taxes will receive a rebate, with the amount increasing based on their tax liability, up to an $800 cap.

Married couples who filed jointly will receive only one rebate. Those who did not pay income taxes — around 44% of South Carolinians — will not receive a check.

You can visit the South Carolina Department of Revenue website to calculate your refund and track your check.

Millions of Virginians received one-time tax rebates worth $250, or $500 if they filed jointly. Payments were made by printed checks and direct deposit.

Some 1.3 million rebates will be sent through direct deposit and 1.9 million in paper checks.

The Virginia Department of Taxation’s website lists more information regarding who is eligible and how much they would receive.

According to Virginia Department of Taxation Commissioner Craig Burns, most rebates started going out Sept. 19, with plans to send out 250,000 each weekday.

“Through the end of the year, we expect to issue about 3.2 million one-time tax rebates,” Burns added.

Physical checks are being issued to individuals who did not include banking information in their return, whose direct deposit was declined or whose rebate was offset by outstanding debts.

The agency expected 2.9 million rebates to be issued by Oct. 11, with the remainder trickling out through the rest of the year for returns filed by Nov. 1.