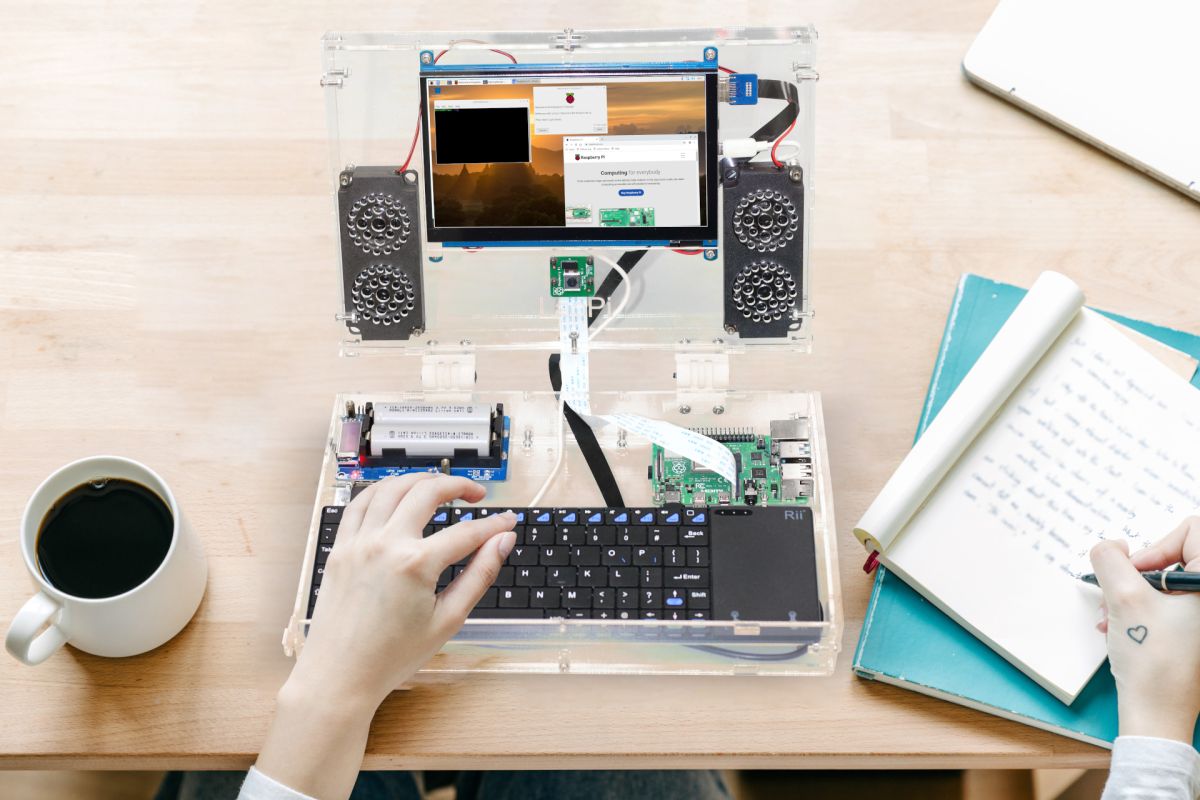 LapPi 2.0 is a kit, made up of individual acrylic parts (available in five colors), held together with machine screws. The kit comes with everything you need to assemble LapPi, including a Raspberry Pi 4 if you pay for a higher pledge. You can also pay a little more for a pre-built model, ready for your next project.

In the lid we have a 7 inch IPS display, with a resolution of 1024 x 600 and connected to the Pi via HDMI. The screen has five-point touch and has audio output which is used with the two speakers flanking the screen. Just under the screen is the official Raspberry Pi camera, specifically the Pi NOIR camera which uses a Sony IMX219 8 megapixel camera. Not the official Raspberry Pi HQ camera, but it can record video at 1080p30 or 720p60. We should note that the camera does not feature a microphone.

In the base we have our Raspberry Pi 4, placed in the back right. This provides access to the USB and Ethernet ports and routes HDMI, powers and micro SD card access to inside the case. LapPi 2.0 is compatible with all Raspberry Pi boards, all we need are the adapters to convert HDMI / power for our chosen model. In theory it would also make it compatible with other single board computers, such as the Khadas VIM 4 and Edge 2 Pro.

Power is provided via an additional board in the back left of the base. The UPS power board looks to be two 18650 Li-ion cells that connect to the Raspberry Pi 4, providing 5V to power the Pi. There are two USB ports on the power board, which we assume will also provide power to the display. Charging the 18650 cells via an external power connection, the power is also supplied to the Pi, meaning we have a portable power source, and a UPS should the power go out.
Keyboard and mouse duties are provided by a Rii Bluetooth keyboard and trackpad. This detachable, wireless keyboard, gives us space to spread out and build larger projects.

Talking of projects, the open base provides us with unrestricted access to the Raspberry Pi’s GPIO. This means we can use many of the best Raspberry Pi HATs without issue.

How much will this all cost you? The kickstarter starts from £199 ($242 direct currency conversion) for the base model and as you increase your pledge, you receive extra perks such as a Raspberry Pi 4 with between 2 and 8GB of RAM or a pre-assembled unit.

Remember that crowdfunding a project is not a guarantee of receiving a finished product. Backing a crowdfunded project is akin to an investment; you believe in the project and want it to succeed. You are not purchasing a retail product.