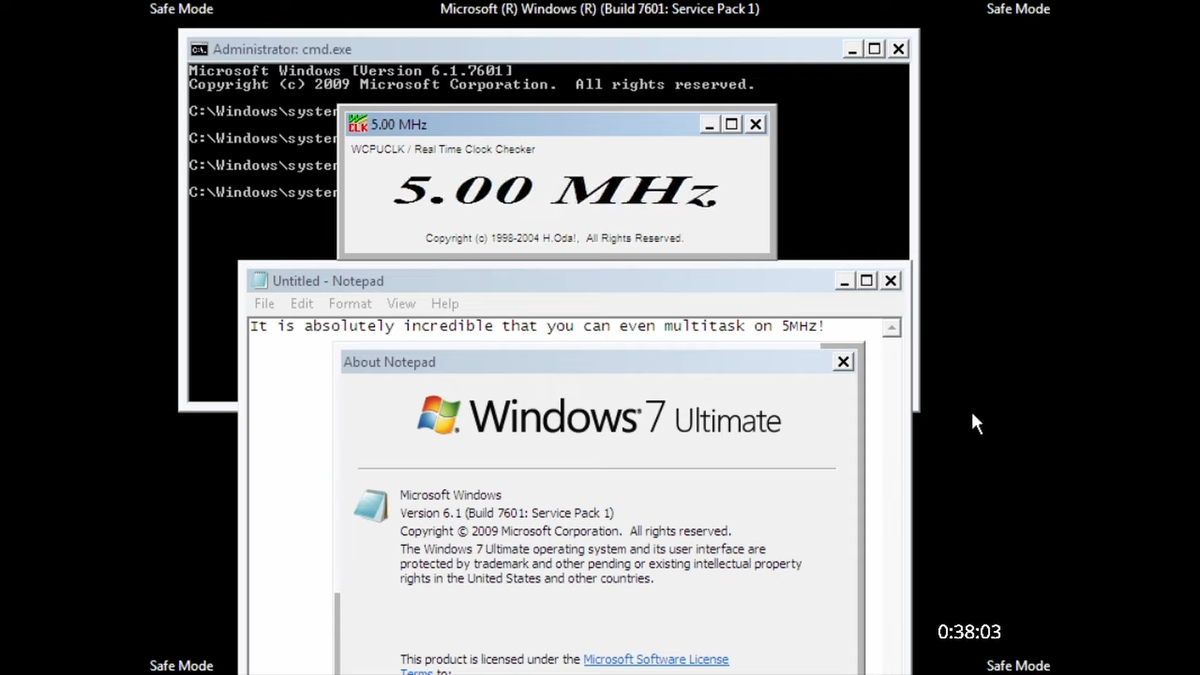 Today, you can’t buy a new x86 processor that runs at under 1 GHz, with most mainstream desktop CPUs carrying base clocks that are well over 2 GHz or even in the 3 GHz range and boosting up much higher than that. However, back in the 1980s and 1990s, processors that operated at just a few MHz were common, with the original IBM PC clocking in at just 4.77 MHz itself.

Could one run a modern Windows operating system on a CPU with such a low clock speed? Developer and popular YouTuber NTDEV has proven that you can, booting and using Windows 7, which launched in 2009, on a Pentium-S processor that was downclocked to just 5 MHz. That’s a full 995 MHz below the 2009-era OS’s 1-GHz minimum requirement. The test system also had just 128MB of RAM, which is way short of Windows 7’s 1GB minimum requirement.

In a YouTube video (embedded below), NTDEV shows the system, which is actually a virtual machine running in the 86Box emulator (opens in new tab),  boot up into Windows 7 Ultimate, launch a program which shows its 5.00 MHz clock speed and even run Notepad. By the way, if you follow the sped-up time counter in the video, you’ll note that it takes more than 28 minutes for the Windows 7 desktop to appear!

In the video, you can see NTDEV power on their virtual machine which POSTs as a Pentium-S running at 50 MHz with a 128MB of RAM. However, it has somehow been downclocked to 5 MHz by the time Windows 7 runs.

NTDEV boots the system and is given a choice to use Normal or Safe modes. They choose Normal mode, but perhaps due to whatever modifications the developer made to the install, Windows 7 appears to boot into Safe mode as the bootloader shows a list of system files while it loads and the eventual desktop has a “Safe Mode” watermark on it.

NTDEV hasn’t publicly shared many details about what they did to get Windows 7 to run on such a slowed-down system. However, the description they wrote for the YouTube video gives us a clue, saying “After lots and lots of optimizations, including even disabling LogonUI and entering in a crippled OOBE state, I have finally managed to run Windows 7 on just 5MHz.”

By pairing down the DLL files, system services and other components of any version of Windows, one can make sure it requires fewer system resources. Of course, you’ve giving up a ton of functionality, not just the log on interface, but probably most graphical elements.

We noted that the desktop NTDEV shows in the video has no Start menu, there’s no wallpaper and the windows themselves have a very simple theme; there’s no way Aero transparencies would work here. To launch a program, WCPUID / Real Time Clock Checker, NTDEV has to type its shortcut name into the command prompt.  They later do the same to launch Notepad.

Perhaps what’s most impressive about this whole video is that NTDEV is able to, at one point, have four different programs running: the command prompt, WCPUID, Winver (showing the Windows 7 version) and Notepad with some text in it. So this is a fairly-stable boot.

From their tweets and comments, it’s clear that NTDEV isn’t giving up the quest to run Windows 7 at even lower speeds. Perhaps, we’ll even see them get it down to 4 MHz in the near future.