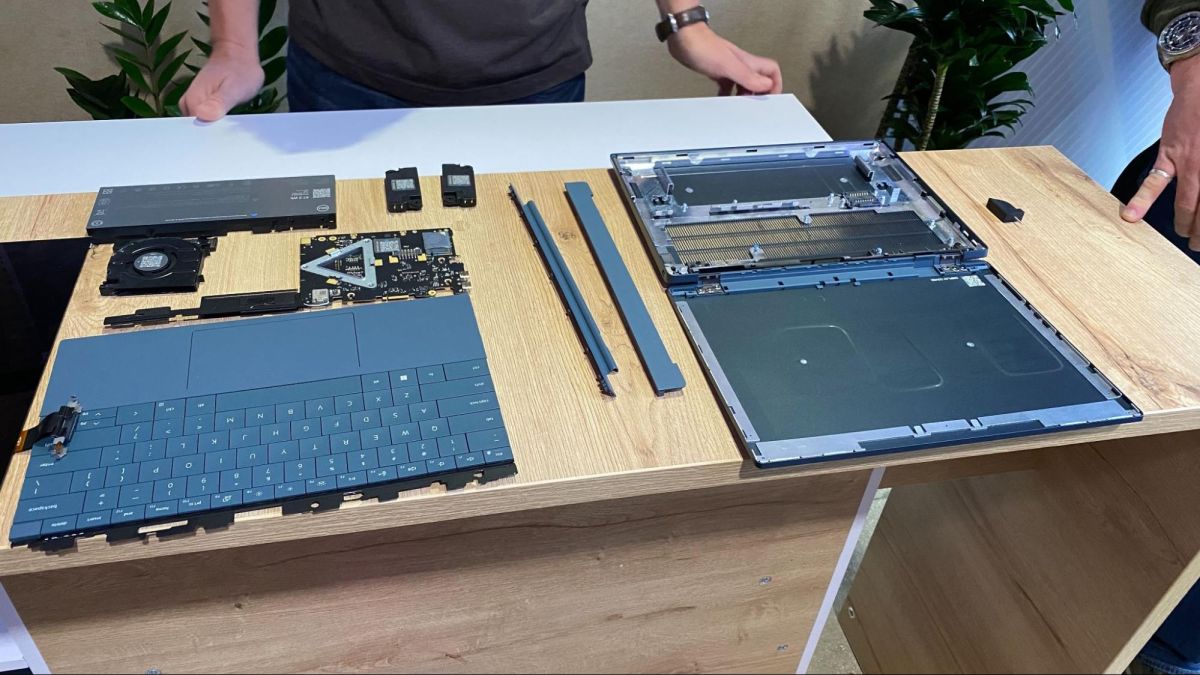 Last year, Dell showed off its vision of more repairable computers with recyclable parts, called Concept Luna. This year, Dell has brought the concept back, and has made it far easier to take apart. Oh, and it lets robots to do the repairs.

The new concept is more ambitious thanlast year’s. The prvious system was also fanless, while this one is actively cooled. To my eyes, the steel and plastic chassis looks very similar to (though not identical to) a Dell XPS 13 Plus, but Dell’s engineers wouldn’t say anything about that.

Where there were previously four screws to remove, the new design opens by inserting a pin (it seems as if a SIM card removal tool or paper clip will also work) in the Noble lock slot, which lets you remove a “keystone” piece above the keyboard. Removing that part unlocks the keyboard, which you can then take off without any ribbon cables — it connects to the system via pins. In fact, there are almost no cables at all, including for the battery, fan, and motherboard, which all come out in succession. Similarly, the display comes out by using a pin, which lets you detach the display’s ribbon cable. (Note there’s a big piece of empty space in the chassis, which you can see in some of the photos. Perhaps this is where a discrete GPU or larger battery could go down the line?)

Dell’s engineers and representatives wouldn’t tell me what components the system was running on, though it did turn on and boot into Windows – a somewhat surprising feat given I saw it go from laptop to a pile of parts and back to a laptop again within a couple minutes. However, we do know that it’s an x86 system; when I asked if it ran Arm, I got an unequivocal denial.

It’s unclear if Luna is being designed with independent repair in mind, but the company is definitely planning for laptops returned to the company. Dell has developed robots that can take apart the devices, scan the parts and decide whether or not they’re fit for use in another device. Perhaps the speakers could be used again, for example, in an effort to reduce waste.

“People working from home, for example, may use external components, such as keyboards and monitors,” wrote Glen Robson, the CTO for Dell’s client solution group in a blog post. “The laptop’s keyboard and monitor have barely been used, even when the motherboard is ready to be replaced. Our Concept Luna evolution can equip and connect individual components to telemetry to optimize their lifespans. At its simplest, it’s akin to how we maintain our vehicles, we don’t throw away the entire car when we need new tires or brakes.”

A demo of the robots scanning QR codes, determining which parts were salvageable or broken and opening the laptop to replace parts. The robots weren’t fast, but Dell says that current designs sometimes require its recycling partners to take more than an hour to disassemble PCs.

Of course, all of this only works if Dell is able to get computers back in the first place. If Luna is ever to evolve beyond a concept, the company will need to supercharge its take-back and recycling programs so that people know what to do with a computer when they’re done with it. It will also have to incentivize them to do so, as opposed to just tossing them in the trash or bringing to a local recycling center.

Dell’s timing is interesting, to say the least. Its first showing of Concept Luna was the same year that the Framework Laptop was released, and in its second iteration released this year with new processors. But the Framework devices are more focused on user upgrades and repair. Dell’s focus appears to be primarily on recycling and repairing at corporate scale.

If Luna ever leaves the concept phase, it could potentially reduce a lot of e-waste. But Dell would also need to figure out how easily repairable laptops like this, which in theory could last much longer than we’re used to with just some easy tool-free component swaps, might affect its whole business model in the first place.