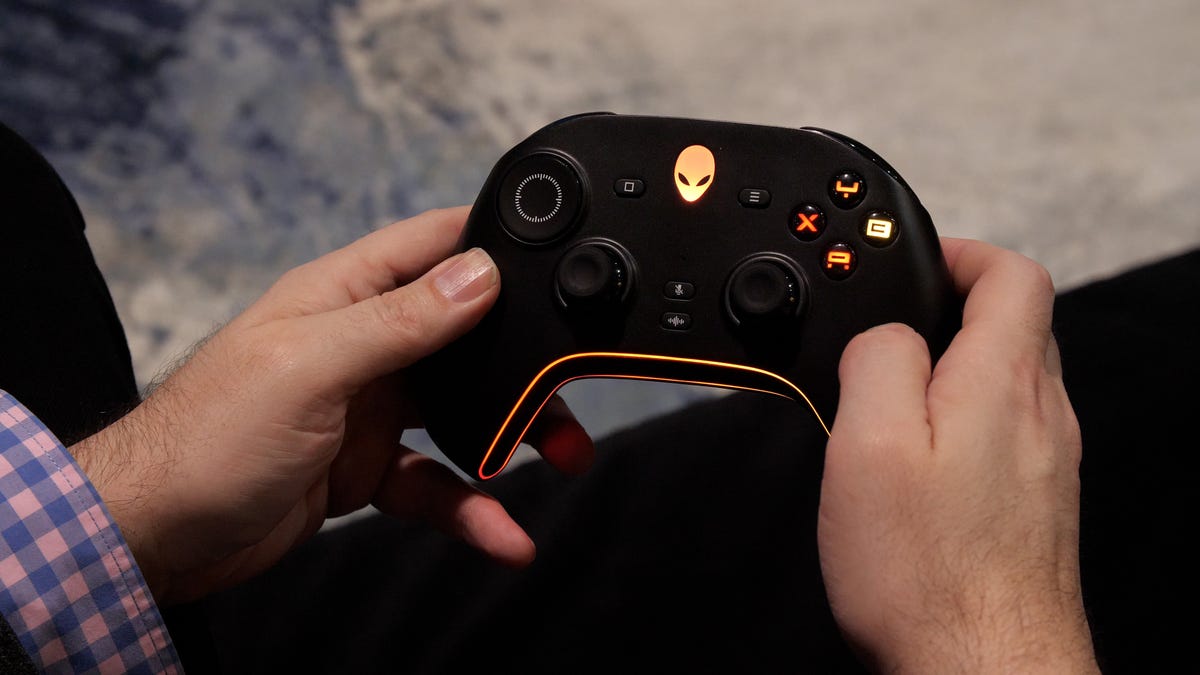 Speaker 1: So Dell always has a lot of interesting concept pieces and prototypes to show off at ces. Usually you see him once and you never see him again. But I do like seeing, uh, this kind of future tech future hardware what people are thinking about this year for ces. Dell actually brought back one of the concepts from last year, uh, and I like seeing it evolve year after year. Even if it’s not really any closer to being a shipping product, you would go out in a store and buy. Now, one thing we saw last year was called Concept nx, N Y X, and it was a gaming server and you could [00:00:30] put all your PC gaming information on it and access it from anywhere in the house so you wouldn’t have to be tied to one location. Okay, that seemed like an okay idea. Uh, this year Nix Xs is back, but now they’re showing off a Nick controller, uh, which frankly is a pretty cool looking game controller.

Speaker 1: It’s got a lot of extra features packed in, even though it has that Xbox Game controller look. Uh, the first thing I noticed is that light up central button. It’s actually a fingerprint reader, which I think could have a lot of applications. Uh, and you know, I don’t have know any other gaming controllers that do that currently. [00:01:00] Uh, there’s also some sensors under the shoulder button so you could run your finger along them and let’s say, I don’t know, increase your volume or decrease uh, uh, your speed and things like that. In addition to pressing them like buttons, there were physical scroll wheels under the central part of the controller. That’s something I’ve never seen before and I could see that having a lot of applications to zoom in on a map to scroll through a menu somewhere. I thought that was pretty cool cuz your thumbs can just hit them and then get out of the way and then flip into the controller [00:01:30] around to the back.

Speaker 1: There were some paddle buttons on the back and I’ve seen those on some controllers before, but Dell was using these as shift buttons. Like you hold down one of the paddle shift buttons and let’s say all the assignments for your face buttons change. And you can have like four different setups like that, especially for PC gaming, where you want to go through a lot of menus and you may have a lot more things, uh, to deal with than you do on console games. Uh, that seemed like a pretty good idea. So even though this concept, Nick’s game controller is again a prototype, it’s not anywhere near being [00:02:00] a real product that you go out and buy. I thought it was one of the cooler prototypes that I’ve seen and I could really see practical uses for this, especially because that standard Xbox game controller style has just become so pervasive.

Speaker 1: It’s the default for all PC gaming, a lot of console gaming, uh, but it’s old. I think it’s definitely time for an evolution there. Now Dell is also using the nickname for what feels like a completely unrelated set of tools and experiences. This was a hybrid work thing, uh, where you could participate [00:02:30] in meetings in VR and mixed reality in real life in front of a monitor, uh, using a bunch of different hardware and software tools. The first thing I did was sit in front of a, uh, auto stereoscopic 3D display, uh, and create an avatar and I could use my hands to do some, uh, you know, motion controls to make my little avatar guy. Then I got up and went to another station where there was an actual desktop monitor, kind of a big desktop monitor in front of me, uh, that had a big camera array on the bottom.

Speaker 1: And this turned out [00:03:00] to also be an auto stereoscopic monitor that’s glasses free 3d, which I saw a bunch of maybe about nine or 10 years ago, really wasn’t ready for primetime. Now I’ve seen several examples of it recently, even here at ces. And what they’re doing now is they’re using eye tracking cameras. So the left and right uh, images that create the 3D image for you are really mapped to your eyes and where you’re looking. So it’s a much better, much more stable 3D effect. I thought it was pretty cool. And there were also some, uh, [00:03:30] very interesting input devices besides the regular mouse. They had these little jog wheels and other sort of office tools that looked like they were very cool for, uh, scrolling through menus, uh, and just interacting with things in a different way than, you know, just the standard mass.

Speaker 1: I thought that was the most interesting hardware part to me. If you said what is the, uh, connectivity hardware part of Nix, it’s probably gonna be this big, uh, monitor with the eye tracking camera below it if it ever even becomes a product. But then I also put on somebody else’s, uh, VR headset. I think it was a Pico headset, and I was [00:04:00] able to participate in the same fake meeting in vr. Then it went into another room, uh, and the whiteboard from the, from the meeting, the virtual whiteboard was there on a screen and I could interact with with a tablet. So I got to see a whole bunch of different ways to be in the same, uh, meeting. And I think that’s kind of a more practical application of this whole metaverse concept because we’re not all gonna be sitting there with headsets on. You’re gonna have not only mixed reality, you’re gonna have people with mixed sets of tools. Uh, and I think that’s what Dell might have been trying to [00:04:30] show me with this mixed connectivity kind of suite of hardware and tools and experiences. But again, these are all prototypes, they’re all concept pieces. They’re just meant to kind of work out ideas and they may or may not ever work their way into real products. But I do like seeing people take a deeper look at what the future of work is going to be like.