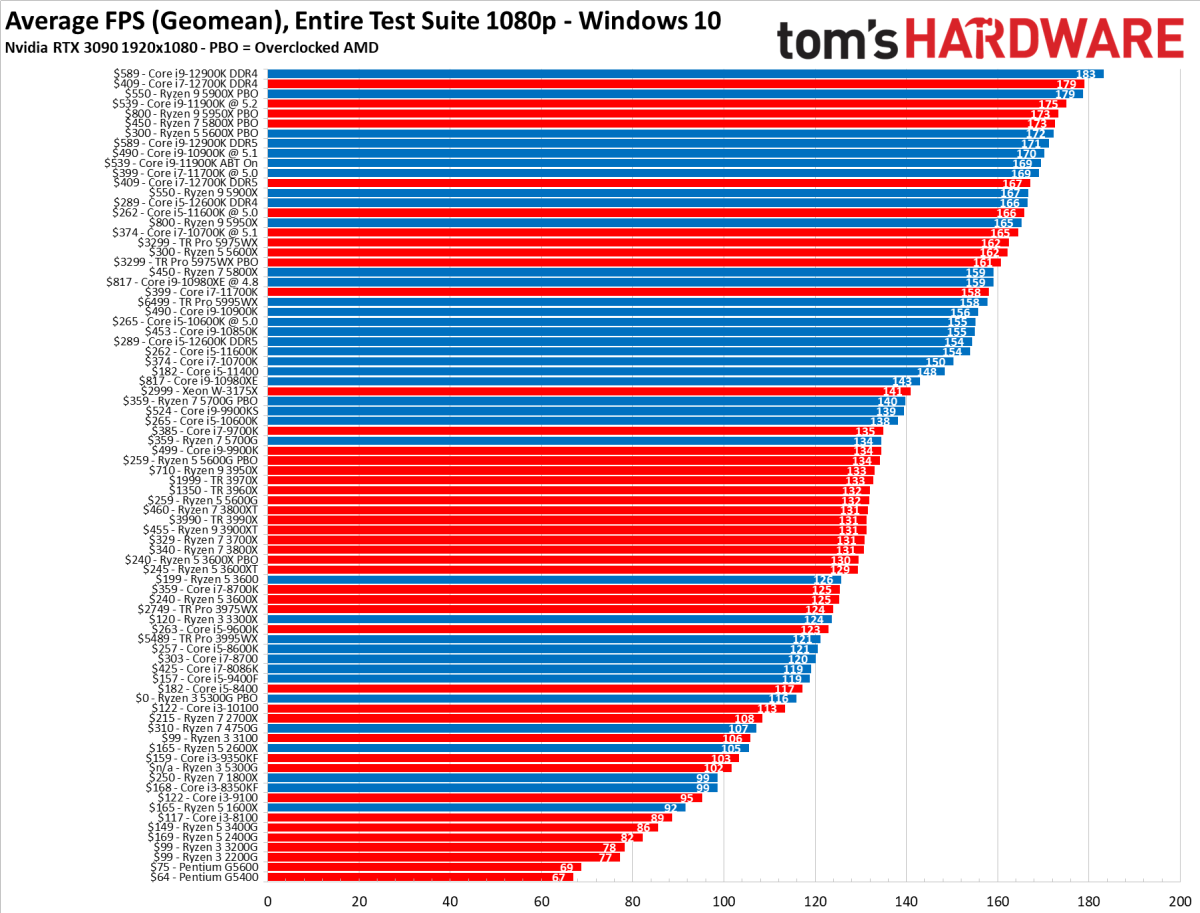 Our CPU benchmarks performance hierarchy ranks current and previous-gen Intel and AMD processors based on performance, including all of the Best CPUs for Gaming. Below the CPU ranking charts and tables, this guide also gives you a basic introduction to CPU benchmarking and includes a list of commonly-used CPU benchmark utilities.

Your CPU greatly affects overall performance and is considered a computer’s most important component. CPU benchmark comparisons help us sort out the differences between chips, but when it comes time to buy a CPU for your desktop, you’ll find a dizzying collection of model numbers and specs from both Intel and AMD.

We’ve listed the best CPUs for gaming and best CPUs for workstations in other articles, but if you want to know how each chip stacks up against all the others and how we come to our decisions, this CPU benchmarks hierarchy is for you. If you’re looking for a broader view of the current state of the market, head to our AMD vs Intel feature for more CPU comparisons.

Intel recently released the first Raptor Lake chips, which come in the form of the Core i9-13900K, Core i7-13700K, and Core i5-13600K. These chips are game-changers, upsetting AMD’s product stack and offering a better value at every price point. Intel is expected to announce its 65W locked Raptor Lake processors at CES 2023 next week, so keep your eyes peeled for new reviews and test results.

We’ll explain how we ranked the processors under each table. The game testing ranking is first. We also include an application performance metric, which we’ve split up into single- and multi-threaded measurements. We also have an integrated graphics CPU benchmark ranking so you can see how AMD’s APUs stack up to Intel’s lineup.

Here are the current rankings for the Alder Lake chips compared to the Ryzen 5000 lineup in Windows 11, along with DDR4 vs DDR5 benchmarks and CPU overclock configurations. We also have a broader selection of tests below for Windows 10, so refer to those charts for a greater historical perspective.

We recently added the Raptor Lake and Zen 4 Ryzen 7000 CPUs to the hierarchy above. We tested the Ryzen 9 7950X and Ryzen 5 7600X with updated software and BIOS revisions, so these results are not directly comparable with our historical data. That’s not to mention that we tested with the Nvidia RTX 4090, whereas our older test suite used the 3090. As such, we have the most important Ryzen and Intel SKUs in the first four charts, and then an additional four charts that have an expanded list of chips.

We conducted these tests in Windows 10, which penalizes the 12th-Gen Intel scores. This is because Windows 10 doesn’t target threads at the correct cores with the precision that we see in Windows 11 (typically, this doesn’t result in much performance loss, and you can use third-party freeware to fix the few issues). You can see the Windows 11 results in the album in the first album in the article.

We rank all the Intel and AMD processors in the tables below, but we don’t include CPU overclock performance rankings. You can see all of those numbers in the charts above. We’ve also added separate charts for integrated graphics testing.

*indicates an APU tested with a discrete GPU. Note: These types of processors are geared for performance with integrated graphics – please see individual reviews or our section below for those performance rankings.

We’ve ranked all the Intel 12th, 11th, 10th, 9th, 8th, and 7th Gen processors, along with AMD’s Ryzen and Threadripper chips from all four generations. We have two rankings for each chip, based on 1080p and 1440p CPU gaming benchmarks. We conducted these tests in Windows 10 for compatibility purposes. You can see how the Windows 11 hierarchy looks in the slide show further above. The most powerful chip gets a 100, and all others are scored relative to it.

There’s a notable exception in our charts: The Threadripper Pro 5995WX, 5975WX, and 3975WX have slightly higher performance if we exclude two of the game titles that don’t seem to respond well to their architecture (Borderlands 3 and Far Cry 5). We’ve included those results in this measure to ensure compatibility with our library of results, but the chips score higher with those titles excluded. You can see what that looks like in our AMD Threadripper Pro 5995WX and 5975WX Review.

The chart is aligned in order based on the 1080p game results, but the 1440p listings aren’t listed in sequential order due to unfortunate limitations with our tables. Pay attention to the 1440p rankings: Some faster chips at 1440p CPU benchmarks may be listed below slower chips due to the 1080p results. You’ll also notice that the 12th-Gen Intel processors, like the 12900K, 12700K and 12600K, have two measurements for each entry — that’s to quantify performance with both DDR4 and DDR5 memory, with the former almost always offering better performance in Windows 10.

Here’s our list of gaming performance with integrated graphics on several of the leading APUs available. We’ve split this into two different price ranges, so be sure to flip through all of the performance charts. For a bit of commentary and analysis of these results, head to our Ryzen 7 5700G, Ryzen 5 5600G, and Ryzen 3 5300G reviews. The most powerful chip gets a 100, and all others are scored relative to it.

We calculate the above single-threaded CPU benchmarks rankings based on a geometric mean of the Cinebench, POV-Ray, and LAME CPU benchmarks. The most powerful chip gets a 100, and all others are scored relative to it.

We conducted these tests in Windows 10, which penalizes the 12th-Gen Intel scores. This is because Windows 10 doesn’t target threads at the correct cores with the precision that we see in Windows 11. You can see the Windows 11 results in the album in the first album in the article, but suffice it to say that Alder Lake chips, like the Core i7-12900K, 12700K and 12600K, lead by large margins in Windows 11.

Single-threaded performance is often tied directly to the responsiveness and snappiness of your PC in any number of daily applications, like loading an operating system or surfing the web. This metric largely depends upon a mixture of instruction per cycle (IPC) throughput (the number of operations the chip can execute in one clock cycle) and frequency, which is the speed at which the transistors switch between on and off states.

However, a whole host of other considerations, such as cache, architecture, and interconnects (like rings, meshes, and infinity fabric) impact this measure of per-core performance, so these results do not align perfectly based upon clock frequency. Instead, performance varies with each application and how well it is tuned for the respective architectures.

The multi-threaded workload column is based on CPU benchmarks performance in Cinebench, POV-ray, vray, Blender (four tests – Koro, Barcellona, Classroom, bmw27), y-cruncher, and Handbrake x264 and x265 workloads. These CPU benchmarks represent performance in productivity-focused applications that tend to require more compute horsepower. The most powerful chip gets a 100, and all others are scored relative to it.

We conducted these tests in Windows 10, which penalizes the 12th-Gen Intel scores. This is because Windows 10 doesn’t target threads at the correct cores with the precision that we see in Windows 11. You can see the Windows 11 results in the album in the first album in the article, but suffice it to say that Alder Lake chips, like the Core i7-12900K, 12700K and 12600K, perform much better in Windows 11.

Be aware that architectures, caches, and interconnects profoundly impact these results, as all of these factors impact how well performance scales with additional threads. Performance rarely scales perfectly with the addition of more cores/threads, so the scaling factor of each processor architecture weighs in heavily on the value proposition of going with a higher core count processor.

How to Benchmark your CPU

Benchmarking your CPU is also an essential practice for CPU overclocking or merely tuning your system. Simply run a CPU benchmark before you make any changes, then re-test after changes to see the results. You can head to our deep-dive details of overclocking in our How to Overclock a CPU guide.

How do you benchmark your CPU? Well, that’s not as complicated as you might think. Choosing the best CPU benchmarks can be a daunting task, but the general rule is that the best performance benchmark is simply measuring the performance of the programs you use the most. So naturally, simply due to a lack of comparable test results, these real-world benchmarks might not give you a means of comparing your performance to other CPUs.

However, if the programs you frequently use don’t have built-in benchmarks you can also use similar types of programs (renderers or encoders, for instance) as a proxy for your workload. There’s also a selection of well-known benchmarks with large databases for easy comparisons. You can also compare your results to the benchmarks you see in our library of reviews to get a good sense of how your system stacks up. We’ll list out some great application benchmarks with download links below.

These same theories apply to CPU game benchmarking — the best CPU benchmark is the game that you play the most. You can download an fps counter, like FRAPS, to measure performance during your gaming session. Games can vary widely, so we don’t have a specific list of titles to test, but you can simply use the gaming CPU benchmarks you see in our reviews as a good starting point.

You can also use synthetic gaming CPU benchmarks, a few of which we have listed below. Just be aware that these synthetic CPU benchmarks don’t tend to translate well to real-world gaming, but they do show us the raw amount of compute power exposed to game engines. However, given their stability and repeatability, these are great benchmarks for comparing performance before and after any changes you may make to your system.

Best CPU Benchmarks You Can Run

Recognizing that a lot of older platforms are going to be paired with graphics subsystems multiple generations old, we wanted to define the top of our range to encourage balance between host processing and complementary GPUs. At this point, anyone with a Sandy Bridge-based Core i7 would realize a gain from stepping up to Coffee Lake or Kaby Lake, for example. And putting AMD’s top FX CPUs next to a handful of Core i7s and those older Core i5s represents an upgrade to their status.

Currently, our hierarchy consists of 13 total tiers. The bottom half of the chart is largely outdated; you’ll notice those CPUs dragging down performance in the latest games, whether you have one of the best graphics cards or not. If you own a CPU in that range, an upgrade could really take your experience to another level.

Really, it’s the top five tiers or so that remain viable. And in that top half of the chart, an upgrade is typically worthwhile if it’s a least a couple of tiers higher. Otherwise, there’s just not enough improvement to warrant the expense of a fresh CPU, motherboard and RAM (not to mention the graphics card and storage solution you’d be considering as well).