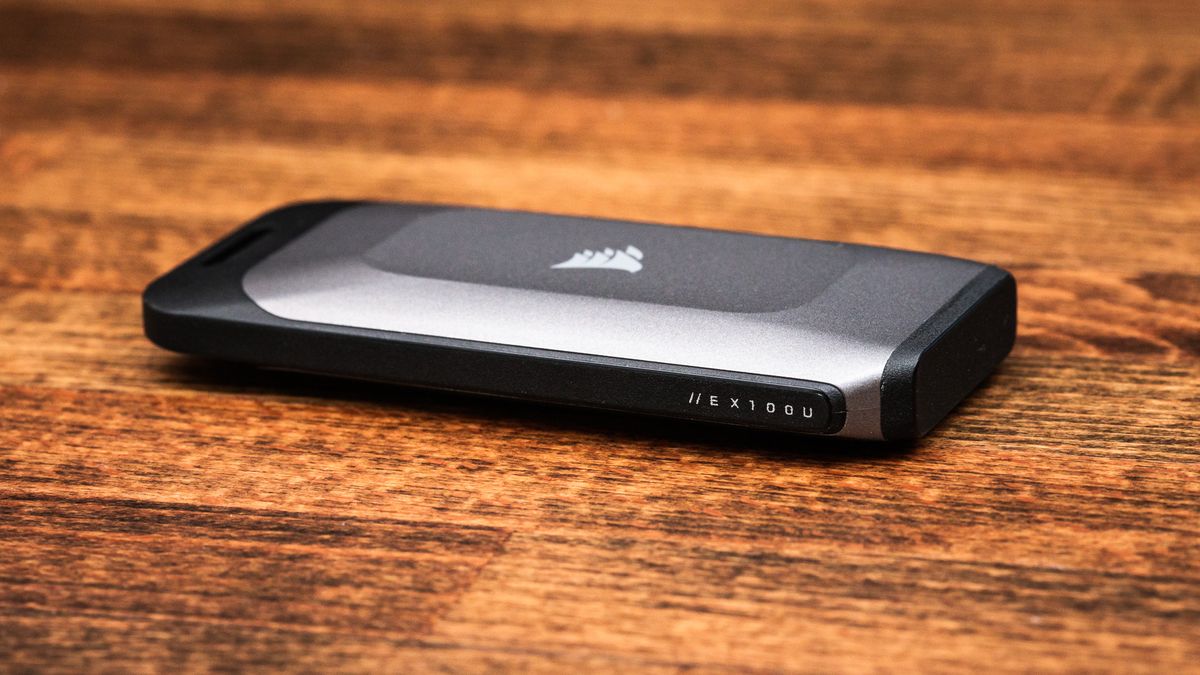 The Corsair EX100U is an unexceptional portable SSD that manages to pack up to 4TB with a 20 Gbps interface in a small package. It does this using TLC rather than QLC flash, which is preferred, but performance as a whole is inconsistent. The warranty is a bit on the weak side but Corsair does back it up with software and includes both popular types of USB-C cables. Pricing is not particularly competitive but this is a competent middle-of-the-road portable SSD – if you’re not looking for anything fancy.

Portable SSDs tend towards the cheaper end, for example at 10 Gbps with QLC, or at the more expensive professional end, with Thunderbolt speeds and performant TLC. Examples of both would be the Inland Platinum External and SanDisk Professional G-Drive (previously G-Technology G-Drive), respectively. It’s possible to get good sustained performance at 10 Gbps, such as with the Samsung T7 Shield, but affordable 20 Gbps options are a bit more limited, particularly if you need 4TB.

The EX100U suffers a bit from an identity crisis with contradictory characteristics, for example having not-horrible sequential write performance but combining it with a cheap design. It’s clearly budget-oriented with its 2-channel controller and lackluster all-around performance yet it comes with TLC, high-capacity options, and a 20 Gbps interface. It’s not aimed at being a professional drive with its weaker warranty and physical build despite having this faster interface. Not on par with the best external SSDs, Corsair’s drive is best defined as a compromise or impulse buy if you need a general portable SSD.

At the time of review, the drive was available on Amazon and Corsair’s website for as little as $102.99, $189.99, and $464.99, from smallest to largest capacity. The 1TB and 2TB models are the best values to be had, but are more expensive than competitors like the Crucial X6 and Inland Platinum External. It’s also more expensive than the Samsung T7 Shield, which is more rugged and professional. The EX100U has the advantage of a faster interface than all three, and faster flash than the first two QLC-based drives.

Software and Accessories of Corsair EX100U

The drive comes with two short USB cables, USB Type-C to Type-A and to Type-C. This allows it to be used on most devices. Corsair also offers a download of its Corsair SSD Toolbox, available on Corsair’s website. This software allows you to check the health of the drive and update firmware if required.

A Closer Look at Corsair EX100U

The Corsair EX100U is diminutive which is beneficial for those that desire maximum portability. It’s also quite lightweight, and as a solid state device it has some resistance to shock and vibration. The USB-C port is hidden behind a rubber cover which when closed will offer some protection from dust and water. The drive is rated to pull up to 4W of power, as shown on the back label.

The cap design is, in our opinion, poor. It’s not intuitive to open and you have to be careful when opening it. It’s not particularly rugged, which is an important point because there must be a good seal in order for it to protect the port from liquids, unlike with better designs.

The drive does not have a lot of protection and also no thermal padding. It’s a single PCB with an embedded USB-C connector. On-board we see four NAND packages, the controller, and two additional integrated circuits (ICs) that stand out.

The controller is the Phison U18, the faster sibling of the U17 that we saw in the updated Crucial X6 and the Inland Platinum External. These two controllers are very similar, but the U18 is 20 Gbps with its USB 3.2 Gen 2×2 interface while the U17 is at 10 Gbps with USB 3.2 Gen 2×1. As the controllers are only 2-channel, the bus speed is necessarily increased from 800 to 1400 MT/s. These controllers are a hybrid design in the sense that they replace the need for an external bridge chip. This can have ramifications for performance and power consumption. It also simplifies the design and saves on cost.

We can also see two Texas Instruments TS3DDR4000 ICs between the controller and the NAND. These DDR switches have multiple applications, for example being able to commit data to non-volatile media from DRAM during a power loss event. This controller is DRAM-less but, of course, current ONFi flash is based on NV-DDR3 I/O. These ICs allow for high speed switching for 1:2 so likely assist the 2-channel controller with the use of four NAND packages. Only the 2TB and 4TB models have four while the 1TB has two, so the latter may not have these chips.

The Phison U18 is a native universal flash drive (UFD) controller which suggests it is designed for USB applications. The 2-channel design reinforces this assumption. As such, the 1400 MT/s bus required to hit USB 3.2 Gen 2×2 speeds may be a bit taxing for a full-on SSD solution. This may be why these ICs are on-board for higher capacities, especially as a USB flash drive will typically not have this many NAND packages. The TS3DDR4000 data sheet explicitly states, for one application, that “to meet the performance requirement of an SSD, the ability to isolate the loading becomes necessary.”

I was not able to get information or confirmation on this from either Corsair or Phison.

The flash is labeled HA7HG64AWA which appears to be 176-layer Micron TLC. Corsair would not confirm this when I asked, possibly to reserve the ability to swap out of the flash at a later date. Corsair lists the drive as having “3D NAND” officially. Given that this drive is available up to 4TB, BiCS5 TLC is another possibility. We did not see any samples of this hardware with QLC at this time.