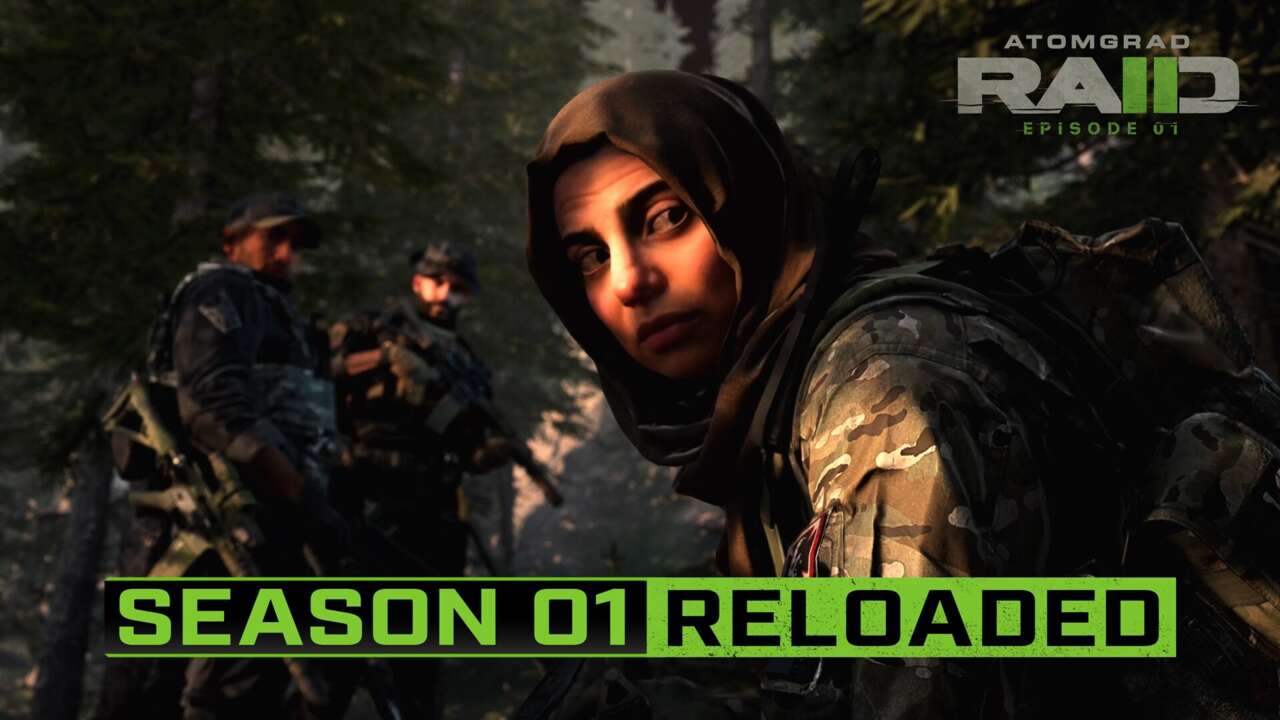 The Season 1 Reloaded update for Modern Warfare 2 is now live, and the big update added Call of Duty’s first-ever Destiny-style Raid. This is a cooperative mission that includes puzzle-solving, close-knit teamwork, and communication. Our full guide will show you how to get the Raid completed and reap its rewards.

What are Raids in Modern Warfare 2?

Raids continue the story of Modern Warfare 2’s campaign, and this is a trio mode with a mix of stealth, action, and puzzle-solving objectives, which collectively feels very similar to the experiences of Call of Duty’s Zombies Easter eggs. Episode One: Atomgrad launched on December 14 with Season 1 Reloaded. This is the first of five seasonal episodes, with a new Raid episode set to arrive for each season of Modern Warfare 2.

How to complete the Atomgrad Raid

In order to access the Raid, you’ll first need to complete a challenge to earn a Raid Assignment. Here is our full guide on how to access the Atomgrad Raid.

Assuming you’re all queued up and ready to go, here is a full breakdown of the steps to complete the Atomgrad Raid.

Clear out enemies from the start of the Raid, and you’ll want to follow the water and proceed to the back right side of the facility, where you’ll see a room with a red light above the entrance. Head inside the room. The room has a table at the center with four monitors. If you hit the red button on the wall to the right of the monitors, you’ll have another room with the same four-TV setup. The first room is the main room, but you’ll need to use both rooms to solve this cipher.

You’ll need to split your trio into different roles to complete this. Have two players split up, allocating one player to each room’s monitors. The third person will be responsible for reading the codes.

The player in charge of reading the codes will be in the main room, standing at the code box that sits in the corner to the left of those monitors. There are three characters displayed on the code box. This code will be a mix of American and Russian letters and numbers.

The code person should call out or describe the first letter, and the other two players will need to cycle through the cameras on the security monitors until they find the camera that reveals a large screen with a set of numbers and letters. Once a player finds the first letter that matches the initial code on the box, they’ll need to call out the number listed right below the matching letter. Repeat this step for the next two letters on the code box. You’ll end up with a three digit code.

The code person should take the three numbers and input them into the machine to the right of the first room’s TV monitors. Completing this step will require you to all switch roles, because the same players can’t use the code box each time.

Repeat the same process again. Have the new code person call out the letters one by one to the monitor viewers. Match the three numbers and input them into the machine on the right.

Now you’ll need to do this same process a third time, with the code person being whoever hasn’t input the codes yet. Enter the final code to get a door to open in the water area you originally came from.

You’ll get a fourth or fifth symbol on the code box during the second and third decoding. There are false symbols to confuse you. If neither person on the monitors sees the symbol described, skip it and keep calling out letters until you get three numbers to put in the code machine on the right.

You’ll head through the water in the newly open passage, but first, you’ll want to grab an air tank from a table on the left side of the area. Proceeding here gives you a checkpoint.

Note: There’s only one air tank. As you swim, you’ll need to pass the tank to each other to keep enough air to get through the tunnel of water. The path starts linear, but you’ll eventually come to a gate and a red button.

One person will need to breathe air from the tank and stay with the button, holding the button to open the gate and let the others through. Then someone will need to hit the red button just inside the gate to hold the door open for the third. Just beyond this gate is a set of stairs, where you can come out of the water and get a checkpoint.

To continue, dive back down into the water at the stairs to go further down into a flooded hallway. There will be tripwires, so do your best to navigate around them. Swim down the hall, and you’ll see green glow sticks marking a doorway on the right. Swim inside the room and through the opening on the opposite side.

Proceed down this hallway, take the first left you come to and swim across the debris. Follow this hallway all the way until you see white arrows on the wall telling you to turn right. First, you want to go left and use the air pocket inside the elevator shaft. Beware of the trip wires here. This will also give you a new checkpoint in case someone dies, they’ll safely respawn here.

Then head back the way you came to follow the white arrows on the wall pointing to a doorway. Open the door and follow the white arrows to a hole in the ground. It’s filled with trip wires, so be careful here. Either send someone through who doesn’t have the air tank to trigger them, as anyone who dies here will respawn at the nearby elevator checkpoint, or if someone still has armor plates, send them first since the explosion shouldn’t kill them.

You’ll be diving down into a long, narrow tunnel, and you’ll need to keep sharing the air tank to survive here. Keep straight and follow a light to reach a place where you can swim up and climb out, putting you in an area that looks like a mineshaft.

Follow the passage to reach another area where you need to drop down and swim through flooded tunnels. There will be wire fencing here, follow the left side of the fence. There will be yellow signs with arrows to guide you through the turns here, just keep sharing air to avoid anyone dying.

You’ll eventually find a bunker door where you can swim up and surface. This is a safe area/checkpoint.

Step 3: Power the generator and open a door

The person left behind will need to wait, while one of the other players holds the red button in the nearby room. Once you’re all together again, head up the stairs.

Step 4: Clear out the armory

Up the stairs you’ll find a room full of weapons and equipment. There will be a few enemies here, so clear them out, and then get geared up for a bigger fight ahead. You’re tasked with clearing out the armory.

At first, you’ll be limited to just a hallway with enemies and a Juggernaut. Take them out, and then look for a red button inside the last room on the right. Press it and you can proceed through a new door.

This leads to a green-lit room with a hole in the floor. Drop down and follow the straight path of the tunnel. This leads you to drop into another tunnel with red lights. Watch out for bomb drones here. You’ll end up in a circular room with multiple sections.

Take notice of the two code machines, which are just right off where you first entered. Beyond that area, you’ll find a red room and a bluish-white lit room. Clear out all enemies and get familiar with your surroundings. This is going to be the final room and puzzle.

Once the armory is cleared, one person needs to stand by the control panel in the red room, another at the control panel in the blue room. These panels can be interacted with to see codes similar to the previous cipher room you solved, but you’re not stuck looking at monitors. The codes are in the rooms, and you want to take a quick peek and move. These rooms get pretty deadly.

The third person needs to be ready at the code machines. The red and blue room teammates need to hit their control panel buttons at the same time to activate the code box for player three. Then the code player can interact with the code box to start the cipher process.

This is very much like the first cipher you solved, but this one is going to be timed and with enemies. Code person will call out the letters and the red and blue room teammates need to call out the number as quickly as possible or determine if the symbol is a false symbol to skip.

Once the first set of numbers is correctly entered into the machine, bomb drones will attack the red room and the blue room will fill up with deadly gas and AI enemies. Take out the enemies and bomb drones while avoiding the gas. Then, switch roles, because just like last time, you must pick a new person for the code box in round two. Repeat the code steps to get the three numbers. Repeat this again for the third set.

The blue room is the most difficult room and gets increasingly harder with the second and third set of codes as the timer decreases. I suggest putting the person with the best memory in the blue room for the later rounds, because the gas and enemies make it hard to get more than a peek at the code.

Once the door opens up, you need to defeat the AI opponents and bomb drones flooding into the location until the time runs out. Defuse any bombs they might plant on the code box. There will be a juggernaut near the end.

You can spread out here, but these are really difficult waves of AI soldiers and bomb drones. My team found it best to all take cover and peek over the boxes around the code machines and stick together, watching different angles. Otherwise, if someone went down too far from the group, it was difficult to revive.

Once the timer expires and the door unlocks, the final step is to have everyone interact with the door between the code box and the input machine. Now, you’ve beaten Modern Warfare 2’s first Raid episode and can enjoy a cutscene.