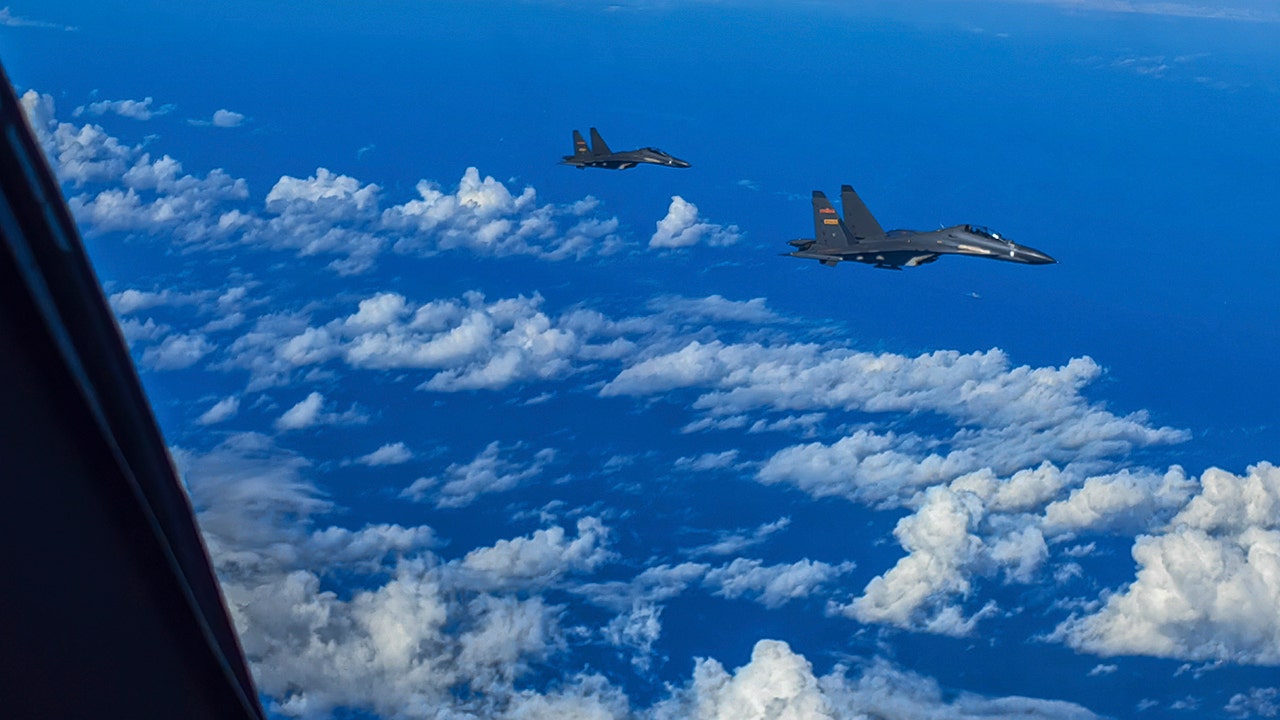 China’s military harassment of Taiwan, which it claims is its own territory, has intensified in recent years, and the Communist Party’s People’s Liberation Army has sent planes or ships toward the island on a near-daily basis.

Between 6 a.m. Sunday and 6 a.m. Monday, 47 of the Chinese planes crossed the median of the Taiwan Strait, an unofficial boundary once tacitly accepted by both sides, according to Taiwan’s Ministry of National Defense.

In this undated file photo released by the Taiwan Ministry of Defense, a Chinese PLA J-16 fighter jet flies in an undisclosed location. China’s military sent 71 planes, including J16 fighter jets, and seven ships toward Taiwan in a 24-hour display of force directed at the island, Taiwan’s defense ministry said Monday, Dec. 26, 2022, after China expressed anger at Taiwan-related provisions in a U.S. annual defense spending bill passed on Saturday.
(Taiwan Ministry of Defense via AP)

Taiwan said it monitored the Chinese moves through its land-based missile systems, as well as on its own navy vessels.

“This is a firm response to the current U.S.-Taiwan escalation and provocation,” said Shi Yi, the spokesman for the PLA’s Eastern Theater Command, in a statement on Sunday night. It announced that the PLA was holding joint combat patrols and joint strike drills in the waters around Taiwan.

Shi was referring to the U.S. defense spending bill, which calls China a strategic challenge. With regard to the Indo-Pacific region, the legislation authorizes increased security cooperation with Taiwan and requires expanded cooperation with India on emerging defense technologies, readiness and logistics.

CHINA LOOKS TO OUTFLANK US IN AFRICA AS SOMALIA FACES TERRORISM, DROUGHT AND FAMINE

A People’s Liberation Army member looks through binoculars during military exercises as Taiwan’s frigate Lan Yang is seen at the rear, on Friday, Aug. 5, 2022.
(Lin Jian/Xinhua via AP)

The official, who was not authorized to be identified and commented on condition of anonymity, said: “The United States has an abiding interest in peace and stability across the Taiwan Strait. We will continue to assist Taiwan in maintaining a sufficient self-defense capability in line with our long-standing commitments and consistent with our one-China policy.”

China’s military has often used large military exercises as a demonstration of force in response to U.S. government actions in support of Taiwan.

It conducted large live-fire military exercises in August in response to U.S. House Speaker Nancy Pelosi’s visit to Taiwan. Beijing views visits from foreign governments to the island as de facto recognition of the island as independent and a challenge to China’s claim of sovereignty.