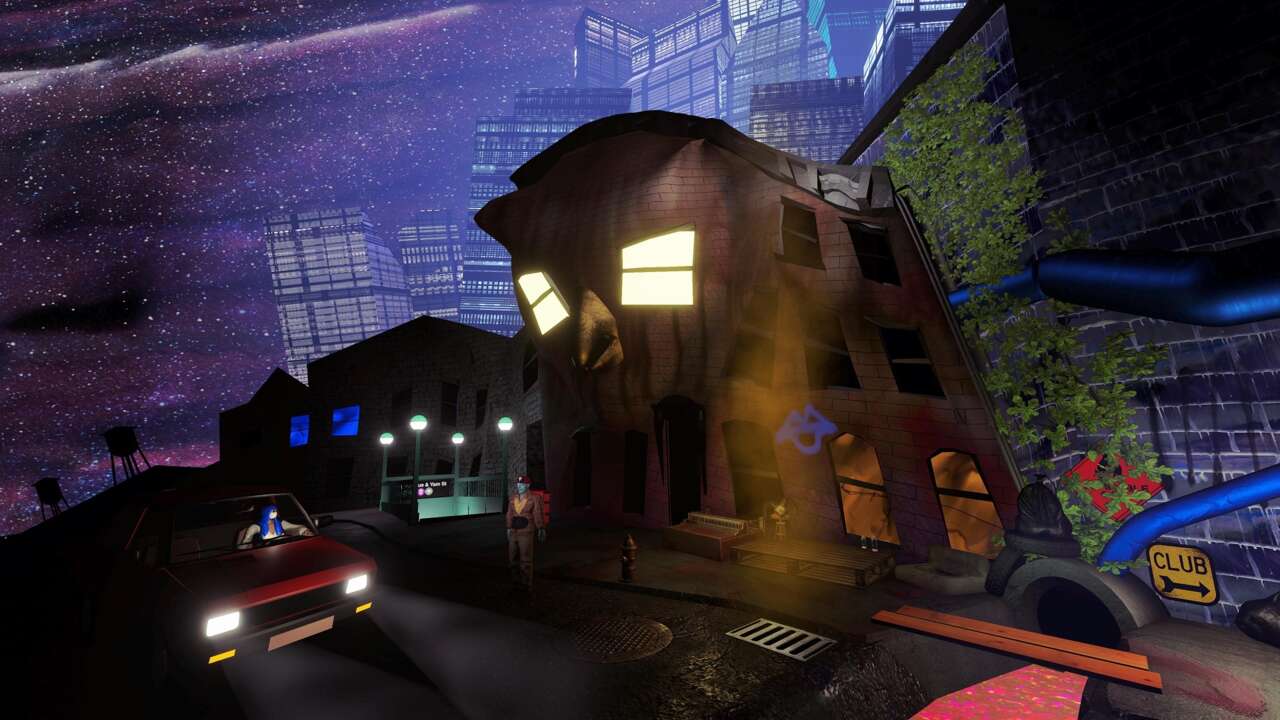 Charisma is one of my favorite skills to level up in RPGs and RPG-adjacent games. Maybe it’s because of my own social ineptitude, but I feel empowered by the fantasy of being able to smooth talk, flirt, or simply make eye contact with a vendor. For decades now, games like Fallout and Mass Effect have sated me with the ability to bend people to my will using a mere stat point and live vicariously through whatever sweet-talking sycophant I wound up creating. However, it turns out that those games and many others are actually pretty bad at exploring conversation in compelling or meaningful ways. Betrayal at Club Low has opened my eyes to the possibilities of dialogue.

Betrayal at Club Low is part of Cosmo D’s Off-Peak series of games, which can only be described as a series of interactive modern art exhibits that snowballed into something bigger. Additional gameplay features have been getting built in to make the various Off-Peak titles more than just walking simulators. However, even with the clear signs of progression throughout all these games, Betrayal at Club Low is a unique experience. The real star of previous titles in the series has been the bizarre world, but here, it’s the dialogue.

The setup for Betrayal at Club Low is clear: You’re dropped off at the titular club with the objective of extracting an undercover agent from beneath the nose of the local crime lord. To infiltrate, you use the guise of a pizza delivery guy. It should be easy for an established pizzaiolo like yourself. Unfortunately, all your conversational skills start off in the gutter, and you need to spend money to get them anywhere useful.

Unlike your typical RPG, where your success in dialogue is primarily decided by your charisma stat and maybe a dice roll if you’re feeling sassy, Betrayal at Club Low makes dice the king. It’s much more like a pen-and-paper RPG, taking its cues from mini-adventures printed in pulp magazines.

You still have seven base stats, but rather than just give you a solid baseline to roll off of, each one represents a six-sided die, and you spend cash to beef up the individual sides of it. This gives you the freedom to balance your dice, but you can opt to keep all sides of them set at 0 and amp the sixth side up to the nines. Like in a more typical RPG, you can choose to specialize, then focus on merely completing tasks that your skill set allows, or you can build a more balanced character and try to accomplish anything. You could grind to boost your skills to the moon, or if you prefer the challenge, you can try to get by with the bare minimum.

It’s a system that is both complex and extremely simple at the same time. What’s unique about it, however, is that it makes dialogue as deep and engaging as any RPG’s combat system. Conversations are now adversarial, with you stacking up your wordcraft against an opponent’s better judgment. This is made better by optional stat buffs, which means that, while your story may seem far-fetched and outlandish, it’s hard not to trust a person with such an incredible jacket.

It’s ridiculously compelling, and while some people might scoff at gameplay that has a chance factor involved, it’s one of the founding principles of RPGs. While the genre has expanded beyond the confines of tabletop rules, it still works as an abstraction of systems like damage. It’s sometimes simplified to different degrees, but mechanics like critical hits are still often decided by chance. If anything, Betrayal at Club Low is more faithful to its tabletop roots.

As I was playing through it, I kept imagining what its system would mean for games like Mass Effect’s romance system. Rather than just being a dialogue tree where you listen to your interest’s life story until it maybe eventually results in sex, you’d have to uniquely build your way there. You could maybe roll for seduction right out of the gate, but you could decrease your chances for rejection by lending an ear. Each time you successfully show empathy, your buffed-up dice gain leverage over the person. Okay, I’m making it sound really creepy, but is rolling for seduction any worse than clicking through a dialogue tree until you reach the bottom?

Betrayal at Club Low has revealed to me a deficiency in how games approach conversation. I’ve always said that, when it comes to video games and their relationship with violence, ballistics are easy and discussion is difficult. Building off similar chance-based dialogue found in Disco Elysium and dice-heavy gameplay such as Citizen Sleeper, Betrayal at Club Low makes discussion an equally compelling part of the gameplay by utilizing systems already common in video games. It might not be a good fit for every game, but it does prove that our charisma-centric characters deserve better.