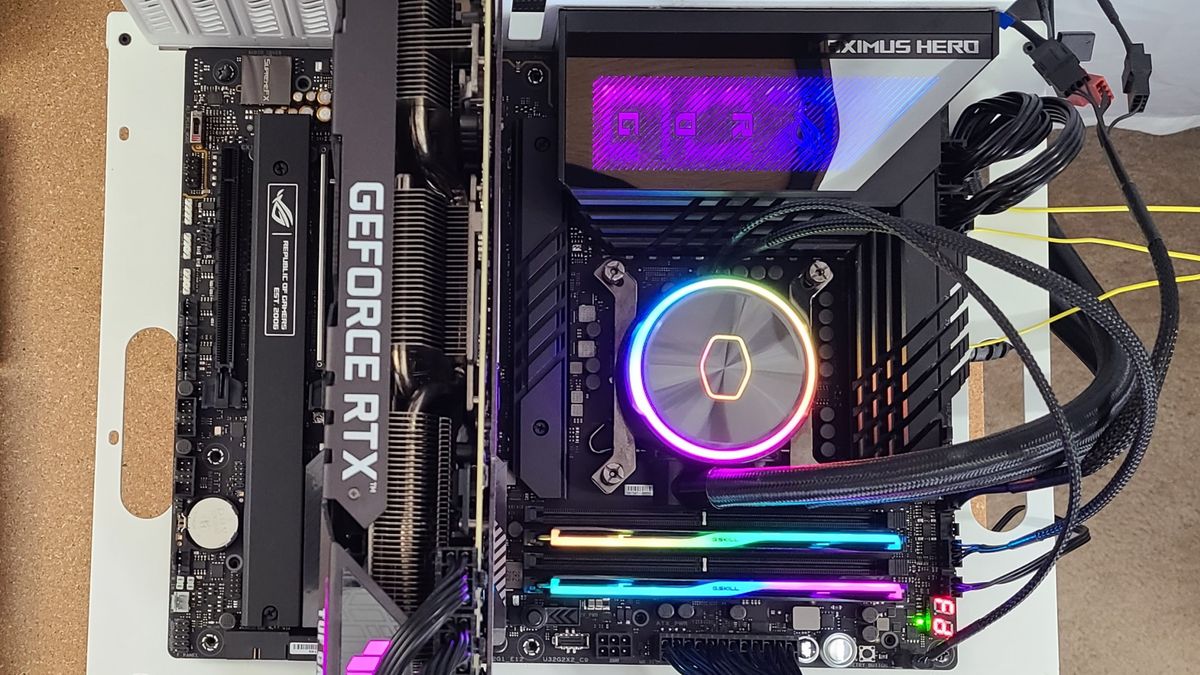 Hot off our test bench and ready for review is the Asus’ ROG Maximus Z790 Hero. Currently priced at $629.99, this premium motherboard offers a slew of features along with the classic high-end appearance found on the ROG Maximus motherboards. You get twelve USB ports on the rear IO, Thunderbolt 4 Type-C ports, five total M.2 sockets, flagship-class audio, and robust power delivery to support the latest Raptor Lake processors. Overall, it’s a good-looking and handsomely equipped option, but the high price will be a turnoff for some users.

At the time we wrote this, Asus had a total of thirteen Z790 motherboards available. You’ll find all of the familiar SKUs, including the ROG Maximus Extreme ($999), Maximus Apex ($699), The Z790-E Gaming WIFI ($499), ProArt Z790-Creator ($469), the Strix line that includes a wide variety of boards (including an ITX model). There are the more budget-conscious Prime and TUF Gaming boards as well, making this about as robust a motherboard stack as you’ll find on a single chipset.

On the hardware front, the Hero comes with everything the Z790 platform offers, and plenty of extra features. You get PCIe 5.0 slots and a PCIe 5.0 M.2 socket, the ROG Supreme FX ALC4082 codec with ESS SABRE DAC, ultra-fast 40 Gbps Thunderbolt 4 Type-C ports on the rear IO, 20-phase 90A VRMs and a sleek, modern, high-end appearance. Performance across our test suite was, on average, the best we’ve seen from our early testing on the platform. Granted, unless you’re looking at benchmarks or your stopwatch you likely wouldn’t notice a difference, but this boardstill tested well and showed it was a competent gamer, too.

With the Z790 Hero currently listed at over $600, while other similarly equipped boards are priced considerably lower, this Hero won’t make our Best Motherboards list. But is still a great option if you like the way it looks and your budget allows. Before we get into the details, including performance, we’ll start by listing the specifications from Asus’ website.

Inside the Box of the Asus ROG Maximus Z790 Hero

The Z790 Hero includes a lot of accessories. Inside the box, you’ll find the ROG Hyper M.2 card, SATA and RGB cables, a USB drive for drivers and utilities, and a lot more items designed to make your life easier when building your system. Below is a complete list of the included accessories.

Pulling the Hero out of the box, just by the weight you know you’re dealing with a high-quality product. The black-on-black design is built on an 8-layer PCB, with some silver accents along with branding on the heatsinks and shrouds. The heatsinks are heavy, with deep notches cooling the VRMs and a beefy heatsink to cool the top M.2 socket. There’s an RGB element above the rear IO area that illuminates some ROG branding – these are the only integrated RGBs on the board. Regardless, the Z790 Hero defintely looks the part of a high-end motherboard.

Starting with the upper left-hand corner, we get a closer look at the RGB element that has matching diagonal lines running through the display. It’s much better looking than the dot-matrix style we saw in previous generations. It isn’t terribly bright, but the colors are saturated, and it looks good. Control over this and any other RGB devices attached to the board are handled through the Asus AURA RGB software (found within Armoury Crate).

The VRM heatsinks are quite heavy, have a lot of surface area with the deep miter cuts, and share the load through a heatpipe that connects the two parts. They did a great job cooling the power bits below when running our flagship Intel Core i9-13900K, as you’ll see later in the review. Along the top edge are two 8-pin EPS connectors (one required) to feed the CPU power. To the left of those is an LED that lights up if the plug isn’t connected.

To the right of the socket, we run into four unreinforced DRAM slots with a single locking mechanism up top. The Hero supports up to 128GB of DDR5, with speeds listed up to a blazing fast DDR5-7800+(OC). We didn’t have any issues with our two kits up to DDR5 6000. It’s clear, at least on paper, that there’s more headroom left. As always, your mileage may vary, so stick to the memory QVL list at extremely high speeds for the best chance of success.

Above the DRAM slots, on the top edge, are the first four (of eight) 4-pin fan headers. All of the headers support PWM- and DC-controlled devices. The CPU headers automatically select the proper mode, while the rest of the ports require manual adjustment. Both the Chassis and CPU fan headers output up to 1A/12W with the W_PUMP+ header outputs up to 3A/36W. You can control the fans through the BIOS or Armoury Crate.

Off to the right is the 2-character Q-code display and the 4-light Q-LED display. These both serve to tell you what’s going on during the board’s POST process. If something goes wrong, one of the four LEDs (CPU, Boot, VGA, RAM) will remain lit, and you’ll have a more detailed code on the Q-code showing you where the problem is.

Working our way down the right edge of the board, we run into the first (of three) 3-pin ARGB headers, as well as the Retry, Start, and Flex key buttons. Next, we hit the 24-pin ATX connection to power the board, along with a 6-pin PCIe connector. You need the PCIe power connector plugged into the board if you plan to use the 60W PD/QC4+ charging capability. Otherwise, you’re limited to 27W of charging output. Last but not least, on the top half is the front panel USB 3.2 Gen 2×2 (20 Gbps) Type-C connector.

Moving on to the power delivery, electricity flows from the EPS connector(s) and onto the Digi+ ASP2205 PWM controller. From there, it heads on to twenty 90A Vishay brand Sic850A SPS power stages dedicated to Vcore using a Teamed configuration (one signal to two MOSFETs). The 1,800A available for Vcore is more than capable of driving the i9-13900K in any situation.

The bottom half is mostly covered in heatsinks and shrouds hiding the PCB below. On the left side, just below the Supreme FX branding, hides the Asus-brand Realtek ALC4082 codec. Currently, this is the best codec on motherboards and it’s supplemented by an ESS ES9218 Quad DAC and several dedicated audio capacitors. If the onboard solution isn’t good enough, you’ll have to buy a dedicated add-in card.

Most of the M.2 sockets and all of the PCIe slots are found in the middle of the board. Starting with the latter, the Z790 Hero has three full-length slots. The two reinforced slots are for video cards and source their bandwidth through the CPU running at PCIe 5.0 x16/x0 or x8/x8. The bottom slot connects via the chipset and runs at PCIe 4.0 x4, but this slot also bifurcates to x4/x4 (see BIOS) and supports the Hyper M.2 AIC (add-in-card).

The included Hyper M.2 module supports up to two modules, but it depends on what PCIe slot it’s installed in as to how many and what type of PCIe slot (4.0 or 5.0) it is. If you throw the AIC in the second (middle) full-length PCIe slot, it will run ONE M.2 drive up to PCIe 5.0 x4 speeds (the onboard Hyper M.2_2 is also disabled). If you install it in the bottom slot attached through the chipset, the PCIe slot bifurcates to two sets of PCIe 4.0 x4 lanes and runs two PCIe 4.0 x4 modules. You can run up to five M.2 storage devices In this configuration. There are certainly a lot of options on the M.2 front, but the specs page and the manual have all the details.

Moving past the chipset area and onto the right edge, we run into the six SATA ports (the top four are from the chipset while the bottom is from an ASMedia controller) and two front panel USB 3.2 Gen 1 (5 Gbps) ports.

Across the bottom of the board are several exposed headers. You’ll find the usual: additional USB ports, RGB headers, and even some headers dedicated to custom watercooling (flow and temperatures)power/reset buttons. Below is a complete list, from left to right.

The rear IO plate on the Z790 Hero comes preinstalled to the motherboard. It has a black background with white labels on the ports, which makes them easy to read. There are a total of 12 USB ports: 2x Thunderbolt 4 Type-C (40 Gbps, passes video as well), 6x 3.2 Gen 2 (10 Gbps, one Type-C) ports, and four 3.2 Gen 1 (5 Gbps) ports. On the left is a button to swap between BIOSes, and a Clear CMOS button. Next to it is the HDMI port for video. On the right is the five-plug audio stack, the Wi-Fi 6E antenna connections, and just above the USB ports, the Intel 2.5 GbE.

MORE: How To Choose A Motherboard